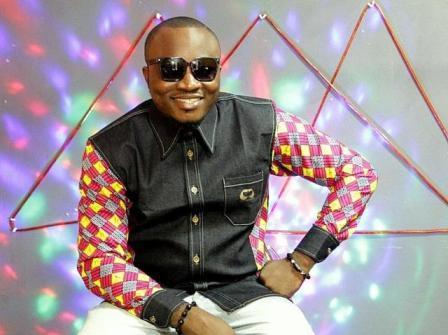 Ghana’s acclaimed ”King of Comedy” Kweku Sintim Misa (KSM) has handed over the title to the young and celebrated Ghanaian comedian, DKB.

“When I see DKB he says KSM you are the man and I say no, I was the man. Now you are the man. I am very proud of him, so it is my pleasure and my duty to introduce to you the new King of Comedy DKB,” KSM announced over the weekend at the National Theater in Accra.

KSM made the comment while welcoming DKB to the stage during the rib-cracking comedy show, ‘Point of View’ organized by Ecstasy Entertainment.

DKB was the main artiste for the event and his act was ‘opened’ by KSM. “I am here today and I’m very happy for these young guys (comedians). Show them some love. They have taken GH comedy to a new level and I am extremely proud of them.

I hosted DKB some time ago on my show and I said DKB, one day you are going to get there and I am going to open for you. He thought I was lying, so when he talked about this show, I was like no problem, I will be there and I will open it for you. That is why I am here today,” KSM explained.

After his introduction by KSM, DKB was carried onto stage in a palanquin while other young comedians, who followed danced and hailed him to signify his new status as the current King of Ghana comedy.

The ‘Point of View’ comedy show held last Saturday would go down in history as one of the most successful shows in Ghana in recent times. DKB’s performance lasted for about an hour and his pronouncements were greeted with laughter from the audience.

Before he started, he told the audience that the show was named Point Of View because he was going to give his views on some happenings across the world. He then started with jokes about how Ghanaians love free tickets.

According to him, he was certain on judgment day if Ghanaians were told going to heaven will cost ?5 and hell free of charge, they would settle for hell. He also made jokes about America and guns, laws on homosexuality in Africa and America, UK Visa acquisition and its fees, Indians and their head gesturing, Ghanaian politicians, police personnel and bribe-taking, Ghanaian musicians and many more.

“They said we were not funny but here we are. So now I want to tell you something, God made no mistake in making KSM, who is the godfather of comedy, to call me the new king of comedy,” he said,

He subsequently dropped his microphone on the floor to climax his performance for the night.

Other comedians who performed at the event were James Brown, Khemical, Foster, Jacinta, Ajeezay De Non-faKing, Hogan, among others.

The audience’s reaction forced comedian Mark Don to leave the stage because they could not understand his jokes although he appeared very funny and drew laughter anyway.

Mark Don’s spectacularly shining shoes became a subject of discussion after he left the stage.

The show was not only about comedy, as two of Ghana’s finest musicians, reigning VGMA Artiste of the Year, E.L and Edem took turns to entertain the audience with music from their respective repertoire. Edem was the first to perform.

He was followed by E.L, who many thought would comment on the speculated ‘lyrical war’ between himself and Sarkodie. He did none of that, he only entertained the crowd who cheered and danced.

He started with “Koko” and signed out with “Mi Naa Bo Po.”