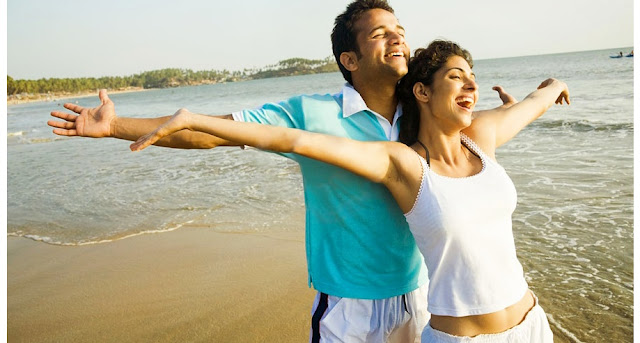 There is probably nothing in life so wonderful, so magical, so delicious as the way you feel the first few weeks or months when you’re falling in love.

The world looks more beautiful. You’re filled with optimism and excitement about each day. Even food tastes more amazing (if you have an appetite, that is — you may feel you could subsist on love alone!). In short, each day is pure bliss. And all because you’ve found the person who really “gets” you… the person you were meant to be with.
Welcome, my friend, to The Honeymoon Phase.

You’ve probably heard this term before, but have how much do you know about it?
Isn’t it just a period of time when a new couple gets to enjoy learning about one another, spending countless hours together and just drinking in that intoxicating feeling that they finally have everything they’ve ever needed and wanted right in front of them?
Well, yes, that’s partly it.

But beneath the romantic notions is the actual, scientific fact that — in the first few months of dating — the intense connection you feel with your new love is mostly chemical. It’s called infatuation.
When you first meet someone you’re interested in and attracted to, something as simple as eye contact or touch can begin to release the chemical in your brain called Phenylethylamine (sometimes called the “love molecule”). This sets off a chemical chain reaction that sends you on that rollercoaster ride of infatuation.

Kanika Goswami describes this phenomenon in “The Physics and Chemistry of Love“:
“Infatuation…is the first stage of falling in love, an unbearable attraction towards someone. This attraction causes a virtual explosion of neurochemicals very similar to adrenalin. Assisted by Phenylethylamine (that speeds up the flow of information between cells), dopamine (that makes us glow and feel good), and norepinephrine (that stimulates the production of adrenalin), make our world go round, our eyes sparkle and our heart beat faster.

Our entire existence then depends on the sight of the person who triggered these reactions to begin with, and as the addiction to the chemical grows stronger, our attraction becomes greater. At this stage we commit foolish mistakes which are the stuff puppy love stories are made of. Actually it is these three chemicals that combine to give us what we call infatuation. We feel we are energized, often floating on air…and the reason why people who are just falling in love can talk for hours on end… (the same person becomes boring at a later stage).”
In other words, you’re not necessarily in love with this man (yet). You’re in love with the way you feel about yourself when you’re around him.

It happens to both partners, and it’s an important and necessary bonding process that — if you truly are compatible — eventually leads to the next phase, attachment. (That’s when all the good stuff like commitment happens.)
But in the meantime, during this Honeymoon/infatuation phase, you must be careful not to let your heart override your head.

You may feel like doing crazy, impulsive things like running off and eloping… or even less dramatic (but equally dangerous) things like ignoring the opinions of close friends and family who express concern that he might not be the right match for you.
In the Honeymoon phase, we often don’t see the red flags that other people who care about us can see so clearly. Our perspective is totally out of whack and we’re only seeing what we want to see.
Another problem with the Honeymoon Phase is that, because it can be so intoxicating,  it’s tempting to chase the feeling like a drug.

Being with a new man makes you feel good — interesting, sexy, pretty, desirable…. When you get into a long term relationship, you can fall into a rut where you and your partner stop complimenting one another, doing fun things together, or even being intimate. That’s an issue for another article, but I bring this up because — rather than working on a relationship to get through the rough patches and create a union that will endure — some women will choose to bail and take up with a new and exciting man who can fill her with those magical Honeymoon feelings all over again.
There’s a psychotherapist I love named Dr. Jenn Berman who has nightly call-in advice show on Cosmo Radio (Sirius/XM). I was listening to her the other night as she counseled a woman who was dissatisfied in her marriage to a man who she claimed was “everything she thought she wanted”…until she met a new guy who really got her motor running. Suddenly, her feelings of depression were lifting and she was giddy from all the compliments and affection from this new love interest.
What should I do, she asked.

Dr. Jenn, who has this amazing way of delivering tough love with a major emphasis on the love, said: “Well, I’ll tell you what you shouldn’t do: You shouldn’t swing to the next vine, hoping that this next man is going to fix the way you feel about yourself.”
“Wherever you go, there you are,” she said, explaining to the caller that the inner-discontent and depression she was feeling was her responsibility to fix (recommending therapy), and that this new man was only a temporary distraction. Certainly not worth throwing away her marriage to a man she claimed was “everything she thought she wanted.”

I wanted to share that advice with you, with a few sincere hopes:

1)  When you start to date a new man, allow yourself to enjoy the bliss but don’t be blinded to the possibility of red flags. Listen to the opinions of the people who care about you. And don’t make any major decisions (e.g. running off to elope) while you’re in this phase, since you simply don’t know enough about the character of the man you’re with.

2)   If you’re in a relationship with a man you love (and especially if you’re married), don’t forget that a partnership takes work. Don’t let a “shiny new toy,” as Dr. Jenn would call a new man, pull your focus and effort from where it belongs: your partner.

3)  Don’t expect any man to fix your feelings of inner-discontent.

If you’re not happy with your life, it’s up to you to do something about it. Chasing the high of the “Honeymoon Phase” by jumping from one new mini-relationship to another will only temporarily distract you from the real issue at hand, whatever that may be (e.g. you’re not taking care of your physical, mental, emotional or spiritual health, you’re not pursuing your dreams, you’re miserable at your job but haven’t made a change, etc).  Remember what Doctor Jenn says: Wherever you go, there you are.
The good news is that a long-term relationship, with all of its challenges, compromises, and ups and downs, can be infinitely more fulfilling than a string of 3-month “perfect” flings. When you open yourself up to a real partnership, although it means becoming vulnerable, you have the opportunity to build trust and stability, and support one another as you work to achieve your life goals together.
After all, the Honeymoon can’t last forever. But true love will.