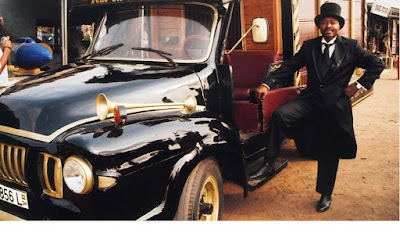 There is a common notion that Ghanaian films are often not as good as foreign films but interestingly, over the years, many Ghanaian films have received great accolades and have even wowed a number of viewers worldwide.

Here is the list of Ghanaian films which left foreign films behind to win many prestigious international awards.

2. Children of the Mountain
Ghana’s Priscilla Anany was adjudged Best New Narrative Director at the 2016 edition of Tribeca Film Festival in New York USA with her movie, “Children of the Mountain.”
3. No Time to Die
No Time to Die, the award winning Ghanaian movie, was among the celebrated movies at the 20th Pan-African Film and Arts festival in Atlanta, Georgia, United States of America, from July 18-27, 2008.
4. Out of The Village
The movie shot in Ghana explores the social and cultural impact of the Ebola epidemic from the perspective of an orphaned brother and his sister. It won “Best International Short Film” at the Foyle Film Festival 2015, and was produced by X-Menactor Bryan Singer. It was directed by Jonathan Stein.
5. Like Cotton Twines
In 2017 Leila Djansi “Like Cotton Twines” won an award at the Riverbend Film Festival which was held in Goshen, Indiana.

Sinking sands was named one of CNN’s 10 Must-see African Movies of The 21st Century.
7. Sink or Swim
The Ghanaian produced movie ‘Sink or Swim’ won the ‘Overall Best Film’ at the 2017 Newark International Film Festival in New Jersey, USA on Sunday, September, 10.
Award winning filmmaker, Ike Nnaebue, is director of ‘Sink or Swim,’ with Ghana’s own, Haruna Seidu Soale Zoree as the Production Manager. Zoree, in the company of actor Adjetey Anang, and others, were at the film festival to receive the award.
8. Me a Belgian, My Mother a Ghanaian
The movie won the GOLDEN DHOW Special Jury Prize at the 2017 Zanzibar Film Festival.
9. Acropolis
Music artists Yaw P and Temple from Ghana, recently produced a short documentary, titled Acropolis, directed by Bread9fe of Third Eye, to document the influences and creative processes that gave life to their music. The film was based on their 2016 released music project and recently won the Best Film award at the Urban Film Festival tour in Kampala. The documentary takes you behind the scenes and gives viewers a firsthand look at creating as Urban Africans.