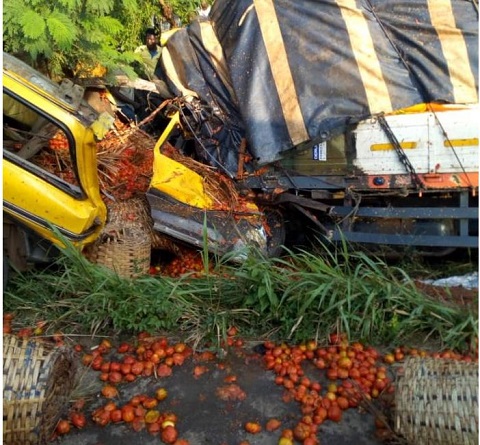 Two drivers have been confirmed dead in a fatal accident which involved Hyundai H100 and a Daewoo Truck at Akyem Asafo on the Apedwa-Bonsu stretch of the Accra-Kumasi Highways.

Bodies of the deceased persons have been deposited at the Suhum Government Hospital Morgue while the only survivor in the car crash, a mate for one of the drivers, is in critical condition at the Emergency Ward of the Kibi Government Hospital.

The Public Relations Officer of the Eastern Regional Police Command, DSP Ebenezer Tetteh explained that the accident occurred on Wednesday, November 21, 2018 at about 4:20pm.

The Hyundai H100 mini bus with registration number GM 2201-16 which was loaded with baskets of fresh tomatoes from the Kumasi direction towards Accra burst the offside rear tyre on reaching Akim Asafo Roman School area, the driver lost control, veered off his lane onto the opposite lane and crashed with the Daewoo truck with Registration number GW 6281-17 loaded with bags of rice from Accra with a driver and a passenger on board.

Local Police told Starr News the driver and Mate in the Daewoo Truck were trapped in the Vehicle while the driver of the Hyundai was ejected by the force of the crash and got trapped under the Daewoo hence it took the intervention of personnel from the Ghana National Fire Service from Suhum to extricate them, but were confirmed dead when rushed to Suhum government Hospital.