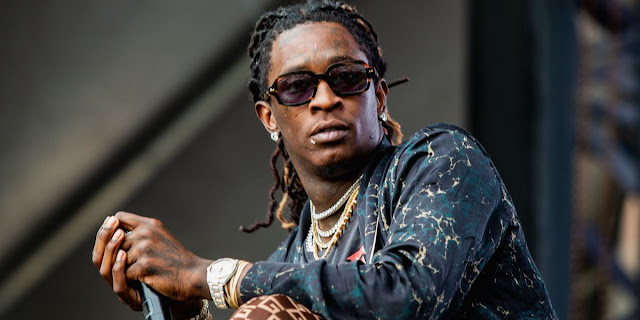 Back in mid-August, it was reported that Atlanta-bred trap star Young Thug was arrested the night of his 27th birthday in the midst of the listening party for his latest album, Slime Language.
A video surfaced of the “Lifestyle” emcee being escorted out of his party, but was set free less than a day later, despite being reportedly hit with charges for concealing a weapon. A month later, he turned himself in after police issued a warrant for his arrest.
Thugger was slammed with eight felony charges, stemming from a 2017 drug case, including possession and intent to distribute meth, marijuana, Xanax and other drugs, as well as another weapon charge.
At the time, authorities uncovered 2.5 ounces of weed, $50K in cash.
Now, Thugger is back behind bars after his recent drug test. As a condition of his release while awaiting trial, he was ordered to remain sober. According to TMZ, he was booked in DeKalb County Jail earlier this morning (Nov. 8).
His attorney, Brian Steel, said, “I will do everything that is lawful and ethical to clear [my client] of this false allegation,” according to the Atlanta Journal-Constitution. Neither Young Thug nor his team has released on his arrest, but you can peep his mug shot below.