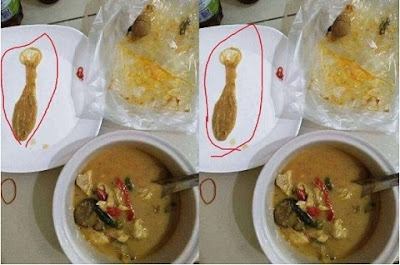 A group of friends who sat under a tree to converse in Salamba, a suburb of the Tamale Metropolis, somehow found a used male contraceptive rubber in a dish of groundnut soup they were served with.

According to the reported emanating from Mynewsgh, the groundnut soup which was intended to be served with some rice balls, was prepared by one of the wives of some male friends.

The report had it that, the friends had already eaten food brought by some of their wives and decided to eat the rice balls with groundnut soup later in the day.


When the time was right, all the male friends gathered to consume the rice balls and were left shocked as only minutes into the meal, one of them lifted a groundnut soup-drenched used contraceptive from the bowl.

Reports have it that most of the men eating the food quickly started throwing up and accused the wife of that particular friend of trying to poison or bewitch them.

The man whose wife had brought the groundnut soup is said to have felt embarrassed by the bizarre happening and quickly rushed home to question his wife over the incident.

The interrogation eventually turned serious as the man is reported to have laid his hands on the woman and beat her severely.

Shouts from the man and his wife, attracted a crowd who rushed to the scene and miraculously prevented the woman from being lynched by irate family members of her husband.

The woman, fearing for her safety is reported to have left her matrimonial home even though she had insisted she was innocent of the accusation leveled against her.

Husband of the lady who is reported to be still aggrieved over the incident did not want to comment on the matter citing that the matter was not for the press.

His wife, has also sought the help of opinion and religious leaders in the area to step into the matter to allow peace to reign so she can return to her matrimonial home.