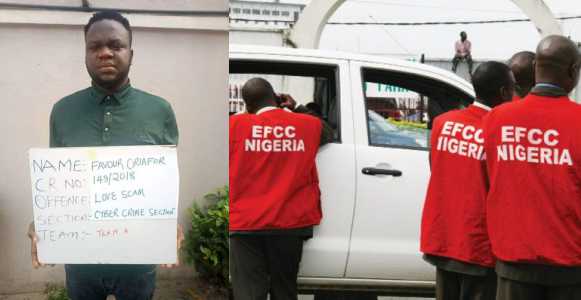 A banker and Account Officer with Access Bank Nigeria, Ojo Adefemi Adedoyin, who allegedly connived with one Favour Oriafoh, 30, to defraud a Hong Kong national, Xu Yue of £79,000 (Seventy Nine Thousand Pounds) have been arrested by the Economic and Financial Crimes Commission, EFCC.

Their arrest came, following investigation into a petition received from the Hong Kong Police Force, that the young lady was a victim of romance scam traced to Nigeria.
Admitting to the crime, Oriafoh who goes by the con name, Terry Mac, confessed that he opened a FaceBook account in the name, just to defraud whoever falls prey to his baits.

“She had fallen in love with me as Terry Mac, a football agent,” he said.

He thereafter took advantage of her love and defrauded her of the said amount, using the domiciliary account of one Adeyemi Hassan Adedeji.

During interrogation, he confessed that the Banker, Adedoyin, provided him with the domiciliary account information to which the money was transferred to.

“The agreement was that whatever funds were received through the account, the account officer and the owner of the account will be entitled to 15 per cent of the funds,” he confessed.

The Banker has made useful information to the Commission and they will soon be charged to court.