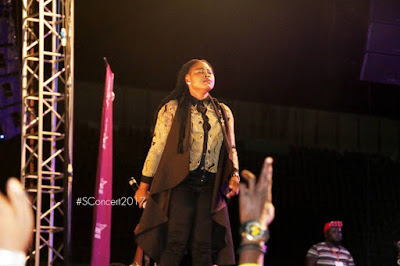 Ghanaian top female gospel songstress, Joyce Blessing has not had easy after her performance at the recently held S Concert.

Joyce Blessing at the event held on December 1 at the Accra Sports Stadium aside her songs entertained the crowd with ‘Fada Fada’ by Nigerian musician Phyno and LilWin‘s ‘Ladder’.

Social media commentators have lashed her for not singing only her songs but performed that of another artiste who was booked for the same concert. They questioned why she would perform ‘Ladder’ when she knew very that Lilwin who owns the song was on the bill for the show.

To them, the ‘Boot 4 Boot’ singer is fond of that act and should repent of it.