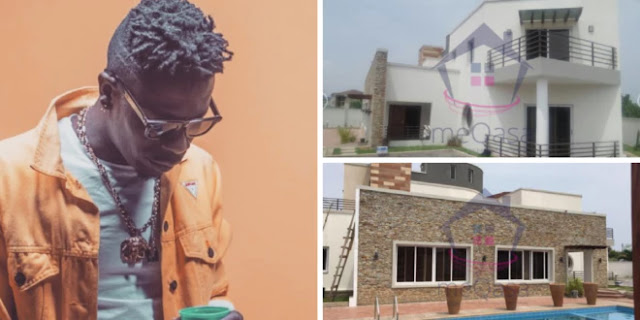 If a new memo concerning Menzgold as sighted by YEN.com.gh on social media is anything to go by, then Ghanaians will witness the seizure of properties by some key artistes of Zylofon Media.


The memo which has been dated October 22, 2018, and simply titled: ‘Concerned Investors of Menzgold’, the group has threatened to confiscate Becca’s Spa, Shatta Wale’s house and cars, as well as those belonging to Benedicta Gafah.

“We are going to seize Becca’s Spa, Shatta Wale’s house at East Legon, Zylofon FM, and Benedicta Gafah’s house and cars,” a part of the memo reads.

The memo which was sighted on the Facebook page of one N NYan Tetteh, then urged all members of the concerned Menzgold investors to converge at the A&C Mall which is directly opposite Becca’s Kora Spa.

Stating the reason for this action, the memo indicated that the Menzgold investors are “tired with the recent happenings at Menzgold, and also at government’s decision to keep mute on the matter.”

According to the group, their investments have been spent on Shatta Wale, Becca, and Benedicta Gafah, as well as other signees of Zylofon Media, therefore, they would seize their assets till their principal have been paid them.

“We are going after these people because our monies were invested in them. They are culprits in one way or the other who helped Nana Appiah Mensah market his grand scheme to dupe us,” the memo explained.

The group further blamed the government for doing little to help the Menzgold investors to get back their monies from the gold trading company.

The Concerned Investors of Menzgold complained that their businesses were collapsing, and further said they were tired of the situation and can’t wait any longer to take action against Menzgold.

“We can’t wait any longer; our businesses are collapsing and families dying. We will do what we have to do!” they threatened.

Meanwhile, other aggrieved customers have threatened a nationwide campaign on a date to be communicated soon.

In a related development, an angry client by name Russel Senam has said he was taking Nana Appiah Mensah and his entire family to a shrine in the Volta Region to discipline him there until he pays his money.

While other customers have blamed Nana Addo for having a hand in Menzgold’s current situation, others have blamed the Bank of Ghana and the Securities Exchange and Commission (SEC) for allowing “dubious” Menzgold to perform for five good years. 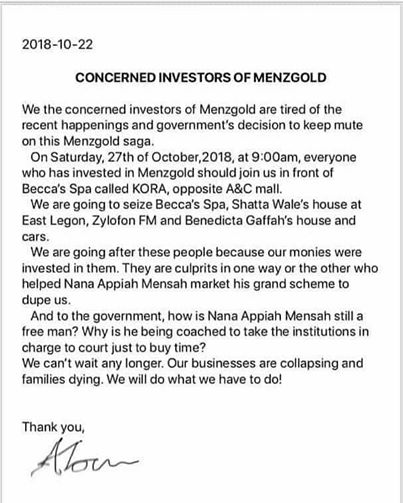