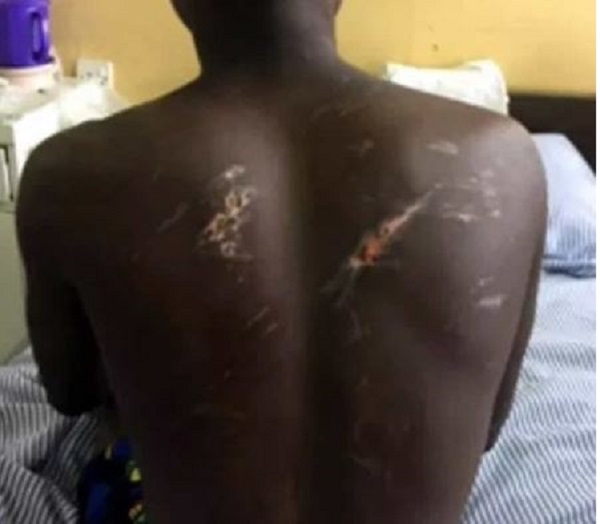 An 18-year-old boy says he has not been able to have an erection for the last two years after suffering intense abuse at the hands of soldiers.

Christopher Kombian Piffa says he does not consider himself a human being anymore because a man who cannot give birth is not considered in my society.


“I am embarrassed when my friends gather and talk about their girlfriends…even though I am older than boast of going out with girlfriends. For me, no erection means I cannot give birth and what is my use to the society?” he said.

On April 4, 2016, Kombian Piffa was alleged to have stolen a mobile phone by three military persons who thoroughly searched him and found no such phone with him.

However, later that day, the victim who usually runs errands for the three military personnel was invited into the barracks and allegedly assaulted.

He told Joy News the worse part of his ordeal was when the men melted plastic on his penis.

This was after he was lashed, slapped, kicked, hanged on a tree and left in the sun for hours just to extract a confession of stealing a mobile phone worth ¢500 in the Northern Region town of Tamale.

“I was lashed with neem tree branches and I cried and begged them to stop but they refused…they hanged me on a tree for hours…they refused to give me water when I begged them that I was thirsty. They then melted rubber and dropped it on my back and my genitals.”

According to him, he gained consciousness while handcuffed to a bed after his torture. He was in great pain and could not eat or drink for months.

Mr Kombian was only able to pass water through a catheter and even using the toilet was difficult so he resorts to adult diapers.

After Joy News broke the story, the Director of Public Relations at the Ghana Armed Forces, Col Eric Aggrey Quarshie promised to deal with the officers and take care of the victim.

“This is more of a criminal act because the GAF will not sanction such a treatment to anybody. The police are handling it and we are also investigating to find the culpability of the officers,” he said.

The Commission on Human Rights and Administrative Justice (CHRAJ) also started investigations into what it said was a human rights violation.

But two years after he was brutalized by the military men, his case remains unresolved and family are disappointed.

Giving an update on the matter, the Deputy Commissioner of CHRAJ, Joseph Whittal, said two streams of investigations have been undertaken simultaneously in Accra and Tamale.

“There have been panel discussions involving lawyers for the two sides…the draft report has been forwarded from the Northern region to the head office.

“We have asked them to quickly follow some two leads which are very critical to the outcome of the case before they resubmit it,” he said.

According to him, the report will be ready by November 31.

The case is part of a documentary “As if we are not humans’ by Joojo Cobbinah which airs on JOYNEWS next week.