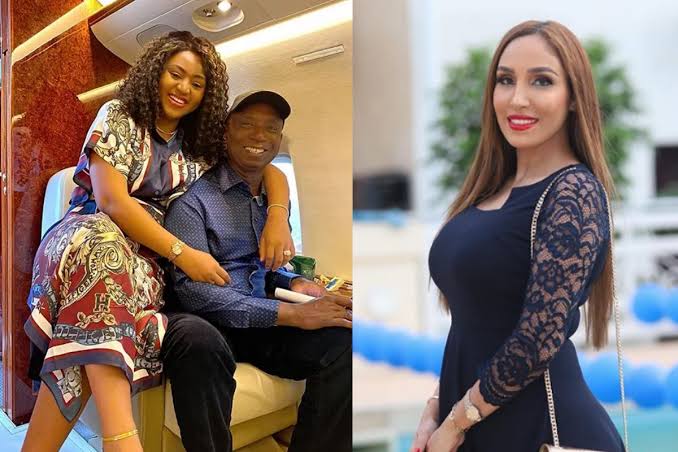 The Moroccan wife of Nigerian politician and billionaire Ned Nwoko, Laila Charani, has announced her divorce.

Laila says she’s done with Ned and their marriage is now over.

Laila took to social media to address all the swirling rumours surrounding her marriage since she unfollowed both Ned and Regina Daniels many weeks ago.

Out of the blue, trouble erupted in the camp of Ned’s married wives.

Laila, who was a senior wife and had taken Regina under her wing, was all of a sudden unhappy with the Nollywood actress.

She seemed to have taken over all of Ned’s affections and this did not go down well with Laila.

After Ned and Regina put on a sickening display of public affection some weeksback, a fed up Laila showed the first public signs that all was not well in their marriage.

As we well know, if you want to know anything about any celebrity, just check out who they unfollowed.

Laila made us know that she was not on good terms with those two.

Since then there has been speculations about what’s happening in their marriage and Laila has now come out to clear everything up.

She wrote on social media: “Hello guys I just want to say that no one has right to talk about my marriage pls. Stop talking about peoples life and I have divorced already and nothing between me and him and anybody follow(ing) me because of him you can unfollow me pls. Thanks,”

It seems in just a few years, Regina has succeeded in pushing away one of Ned’s wives.

Only time will tell if the others will survive the reign of Queen Regina!