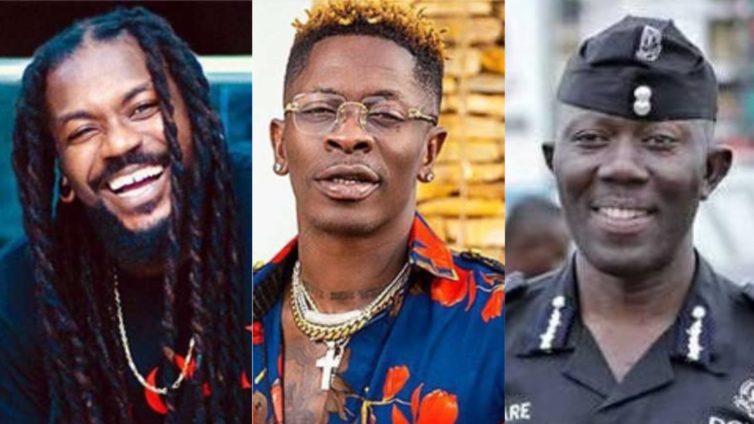 Samini calls on IGP to teach Shatta Wale a Lesson.

An opportunity to attack Shatta Wale has landed on the laps of Samini once again and he is making good use of all the angles.

Samini added his voice to the trending Shatta Wale shooting incident that reportedly happened at East Legon in the late hours of Monday, October 18, 2021 but in a different way.

According to the foe of Shatta, the dancehall musician did not anticipate his stupidity blowing out of proportion and is now hiding out of fear.

Samini indicated that ‘Foolish’ Shatta Wale cracked an expensive joke which does not amuse the current Inspector general of Police, George Akuffo Dampare.

He added that Shatta must be made a scapegoat to deter others foolish enough to follow his footsteps.

He teased in a tweet that ‘gangster’ Shatta Wale is currently on the run and nowhere to be found in Accra after the IGP initiated an investigation into the alleged shooting.

“Chairman @shattawalegh go crack an expensive joke but the current #igp is not laffin … now the matter chop hot and gangsters are on the run Accra is #burning. ok I stop I stop Bandana ne gyimiiii di3 ooooo d333bida smh,” he tweeted Tuesday morning.

A statement by Shatta Wale’s personal assistant Nana Dope confirmed that the musician was receiving emergency treatment after he was reportedly shot yesterday, October 18, 2021.

This came after a Ghanaian Prophet Stephen Akwasi aka Jesus Ahuofe prophesied that Shatta was going to be shot on October 18, 2021.

It was later discovered that Shatta Wale staged his own stunt using the mobile phones of Nana Dope and Deportee to announce his death in relation to the words of the prophet.

He came out to confirm that he was not shot but he is hiding after the Ghana police launched an investigation into the matter. Shatta said he will not return to the country until he notice the laws of the country works.

Thanks for visiting Ghbestpromo.com to read “Samini calls on IGP to teach Shatta Wale a Lesson“