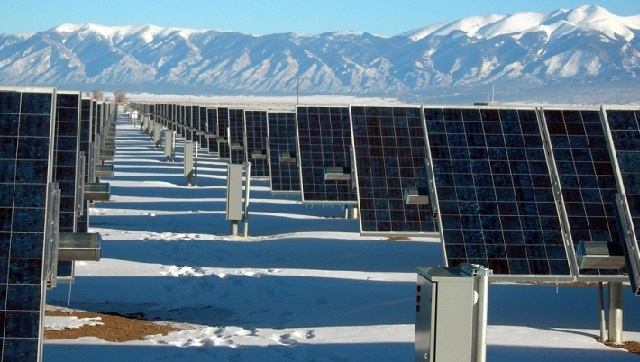 There Solar Panels suck Water from the AIR to Cool Down.

A lot of devices don’t work well when overheated, including solar panels. To improve solar panel efficiency, researchers came up with a way to make solar panels “sweat.” This allows them to cool down and the panel will produce more energy.

SO HOW DO PANELS “SWEAT?”
Over 600 gigawatts of solar power capacity exists and provides at least 3% of the global electricity demand. This capacity is expected to increase by 5 times the amount in a decade.

Silicon is typically used to convert sunlight into electricity, but silicon cells only convert 20% of the sun’s energy. The majority of the rest of the energy turns into heat, which warms the panels by 40 degrees celsius. When a panel system reaches a temperature of over 25 degrees celsius, the panel’s efficiency drops.

In some fields, engineers struggle for a 0.01% boost in power conversion efficiency. Scientists say that even a 1% gain would be a blessing to the economy.

A couple of decades ago, researchers found out that cooling off solar panels with water will provide economic benefits. In order to cool down panels with water, you need an abundant water supply and water tanks.

Materials were developed that can suck the vapor out of the air and condense it into drinking water. The best material is a gel that absorbs water vapor at night since the air is cooler and contains a higher amount of humidity. The gel is a mix of carbon nanotubes in polymers that have a water-attracting calcium chloride salt. This causes the vapor to form droplets that the gel will hold on the panel.

When the sun comes out the next day, the gel will release water vapor. When the panels are covered with a clear plastic the vapor that is released will be trapped and will turn back into water and flow back into a storage container.

An environmental engineer from Hong Kong, Peng Wang, thought of another use for the condensed water. His idea was coolant for the solar panels. A 1-centimeter thick sheet of gel was pressed underneath a silicon panel. During the day, the gel would pull the heat from the panel to evaporate the water it sucked out of the air the night before. The vapor would release through the bottom of the gel and the evaporated water would cool down the panel.

Water-cooled solar panels dropped in temperature about 10 degrees celsius. The output of energy in these cooled panels increased by an average of 15%. The increase in electricity is significant, but findings that rain may dissolve the gel may affect its ability to cool the panel. This may not be a big concern because the gel would be placed on the back side of the panel, protected from the rain.

SOLAR PANELS WITH SOL-UP USA!
Sweating solar panels may be a huge help in creating even more high-efficiency panels, but solar alone could help save your electricity bill. If you are looking to switch to solar, call the expert solar installers at Sol-Up! We offer design and solar panel installation for residential, commercial, and public service clients. We also provide the latest solar technologies at competitive prices!