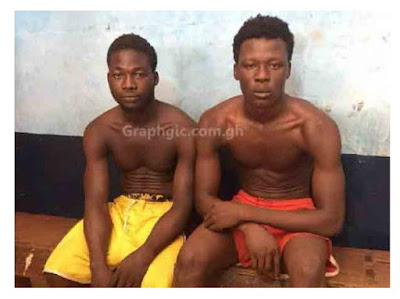 Two suspected armed robbers have been arrested by the police in Tamale for allegedly attacking and robbing two persons at Kanvili-Tuunayili, a suburb of Tamale in the Northern Region on Sunday, July 29, 2018.

The suspects who allegedly robbed the victims, Foritong Cindy Yenulom and Anaba Rophina of Gh¢300,
an Infinix note and Techno mobile phones have been identified as Imoro Abdul-Rahaman, 25 years and Mubarik Abu, 23 years.

According to him, the victims were returning from King David Spot, a popular spot in the metropolis to their home at Kanvili-Tuunayili and upon reaching a section of the road, the suspects who were armed riding a motorbike attacked them and inflicted multiple cutlass wounds on them.

“The victims were rescued by some people passing by who arrested Imoro Abdul-Rahaman and took him to the Kanvili Chief`s palace.

He was later picked up by a Police patrol team.

Abu took to his heels but was later arrested by the police, he added.

DSP Tanko said the two suspects have been charged with the offence of conspiracy to commit crime, robbery and causing harm and would be put before the court within the week.