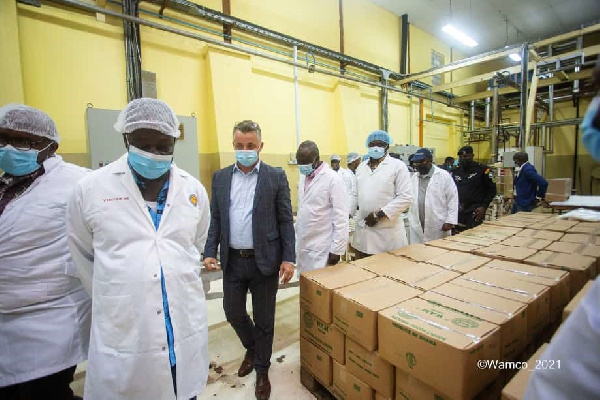 WAMCO bounces back with US $50 million export of cocoa products

WAMCO bounces back with US$ 50 million export of cocoa products.

West Africa Mills Company Limited (WAMCO) has shipped about 20,000 metric tones (MT) of cocoa products out of the country, valued at US$50 million, since the re-activation begun in 2017.

The company has traditionally shipped cocoa products such as natural cocoa liquor, deodorized cocoa butter and expeller cake used as raw materials in chocolate confectionary to Europe, but has now expanded its market to Asia, the Middle East and North Africa over the past four years.

After shutting down for two years (between 2014-2016), the company reopened but had to let some staff go to keep it afloat. However, management has been able to turn things around and the company now has 150 staff fully back to work.

Commenting on the turnaround during a visit by the Minister of Food and Agriculture, Owusu Afriyie Akoto, Chief Executive Officer of WAMCO, Frank Bednar, explained the progress the company has made thus far.

“One of the major elements of the reactivation exercise was to find amicable solutions to labour-related issues for both active and retired staff. WAMCO is a unionised company. Together with our social partner Industrial and Commercial Union (ICU), a member of the Trades Union Congress (TUC), management agreed on the recall of workers, the conditions of service and on payment of exit packages to retired or deceased staff,” he said.

He further stated that despite challenges brought by the pandemic, which affected the cocoa industry in general, WAMCO has taken proactive steps to embark on an expansion drive as part of efforts to recover and take advantage of the market created by the African Continental Free Trade Area (AfCFTA).

“Our company is earning foreign exchange for the country, promoting products made in Ghana and building the capacity of young Ghanaians. Our main objectives in the months ahead are to increase the capacity level by processing more beans; re-activate WAMCO 2 (hydraulic-press plant) to add more value and employ more workers. The plant can also absorb an additional 150 staff as well as modernization of WAMCO 1’s processing plants, as the plants are aging.

“We will invest into more alternative power generation (solar power, waste into energy) to reduce energy costs and restart the shea processing business at the expeller plant during times in which lesser-graded beans are not available, and a new board to steer affairs of the company,” he said.

The Minister of Food and Agriculture assured that government will provide its support for the proper structures to be in place for the company to get back on its best.

“We are talking to shareholders to agree on certain terms before the board comes into being. And once the board is in place we will ensure the work is completed, in terms of what needs to be done,” he said.

Thanks for reading “WAMCO bounces back with US$50 million export of cocoa products” on Ghbestpromo.com