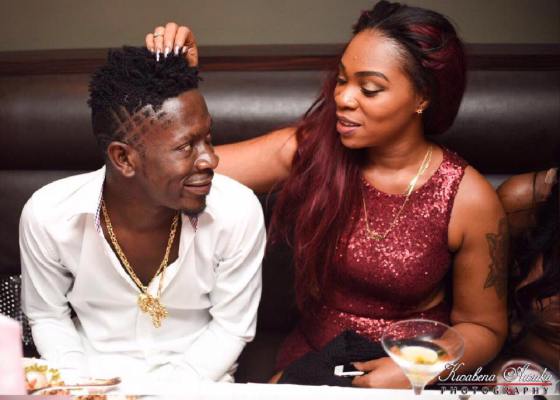 Ghana’s most consistent Dancehall act Shatta Wale has revealed that he is not really married to his baby mama Diamond popular known as Shatta Michy.

The “Taking Over” Singer made the shocking statement on the “Total Showbiz” segment of Okay FM’s “Ekwansodwoodwoo” drive time show, suggesting that he is not officially married to Michy who is the mother of his son Majesty.

“We understand each other and our families are aware we are together and we are like siblings growing as a family. Sometimes I think we need time. There is no need to impress people that we are married. Sometimes the weddings and the whole ‘dondoo dondooo’ doesn’t really mean anything”.

Quizzed further to be more specific with his marital status with Michy right now, the “Hosanna” hit maker said “In the family way, they are aware we are together but people who are ready are getting ready to get married but we are not yet there. Shatta Michy has a lot of things to do, she wants to finish her degree course, she wants to do business on her own and others things. Me too, I want to really get more into my real estate business”

“My wife is still very young and she is now in school, she doing her business management thing. So when things get to where it has to be, she would also get whatever she wants”.

Shatta Wale born Charles Nii Armah Mensah and his baby mother Shatta Michy real name Diamond Michelle Gbagonah who is an Actress/Businesswoman have been together for some years now and they welcomed their first child Majesty in 2015.

LISTEN to interview below