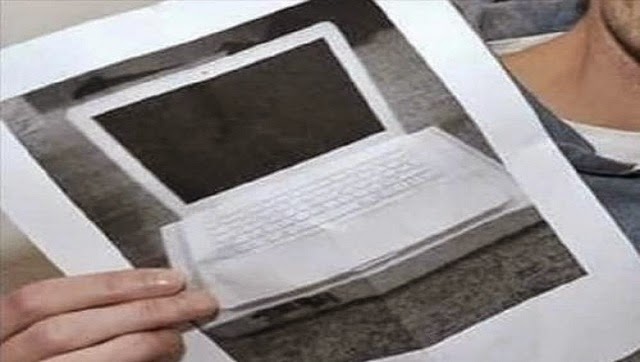 Everything with the prefix “e” seems old-fashioned to me these days.
E-books sound like they come from the last century. And as for eBay, it feels like a strangely ancient way to shop.

People do still flock there though, I’m told. And, just occasionally, they are less than satisfied with their bargaining.

Paul Barrington, for example, thought he’d achieved a rare deal when his bid of 300 British pounds (around $460) for a MacBook was the winner.

He wanted to start a business. No, it wasn’t an e-business. He wanted to be a wedding DJ and needed the laptop in order to download the appropriate software.

He sold his precious surfboard to pay for this venture into uncharted waters. However, as the UK’s North Devon Journal reports, 38-year-old Barrington received a package that was worth less than the paper it was packed in.

Instead of a MacBook, he merely got a picture of one. It wasn’t even in color.

He told the Journal: “I need a laptop so I checked the listing and the seller’s rating. He’d been a member for a few years, so there was nothing to be suspicious about.”

Being British, Barrington almost saw the funny side. He said: “Why bother sending a picture in a box? It doesn’t make any sense. I almost had to laugh.”

There’s an additional cruelty in not only failing to provide a MacBook, but also attempting to laugh in Barrington’s face.

An eBay spokesman told me: “We were very sorry to hear about Mr Barrington’s unusual experience. eBay’s Money Back Guarantee will ensure he gets a refund as soon as possible. With more than 150 million active global buyers having access to over 800 million listings at any given time, the overwhelming majority of listings on eBay come from honest and law-abiding sellers. Bottom line, when you shop on eBay, we have your back.”

When eBay talks about “overwhelming majority” of honest transactions, I understand that internal numbers put the proportion of disreputable transactions at less than 1 percent. I understand the seller in Barrington’s case has been suspended by eBay.

At least, some might mutter, it wasn’t an iPad made of wood, which one woman bought in South Carolina. It wasn’t even a sack of potatoes made to be as heavy as an Apple gadget, as another Brit experienced not too long ago.

The question is whether this seller will take on another e-guise and do it all again.

In e-world, trust is the one thing that can never be guaranteed.