Manchester City are unlikely to bring in more new signings ahead of Thursday’s transfer deadline, according to manager Pep Guardiola.

The Premier League champions’ only major acquisition of the close-season so far came when Riyad Mahrez joined for a club-record £60 million from Leicester.

Another specialist holding midfield option alongside Fernandinho was also a priority but City’s pursuit of Jorginho ended with the Italy international moving to Chelsea from Napoli.

Jorginho struggled in the Chelsea side that City swept aside 2-0 thanks to a Sergio Aguero brace during Sunday’s Community Shield and, after the match, Guardiola hinted his club might be closing in on a new signing.

But he sounded a different tone at Sky Sports’ Premier League launch event on Tuesday when discussing the options within his squad who can operate at the base of the midfield.

“We have Fernandinho, [Ilkay] Gundogan can play there. At Tottenham last season when Fernandinho was suspended he played top

“We don’t have many. I don’t think we are going to sign more this season.

“John [Stones], I think he can play there but I don’t know.” 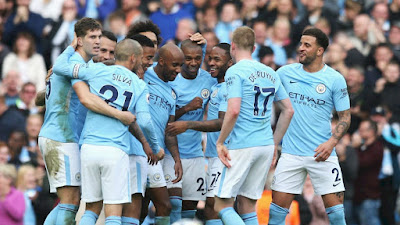 “Before saying anything or doing anything, you want to observe and see if you can see the same mistakes as what we made previously,” the centre-back told Sky Sports.

“I’ve got to be honest. There was a feeling that whenever we won the league and you came back into the first training sessions everybody was a little bit lax – a little bit more smiles and happiness but a little bit less committed. Teams that just wanted it more could actually hurt us.

“I came in this time and it’s completely different. We realise this is precious and we want to hold on to it.”