Shatta Wale In Trouble With Police Over Public Shooting Stunt 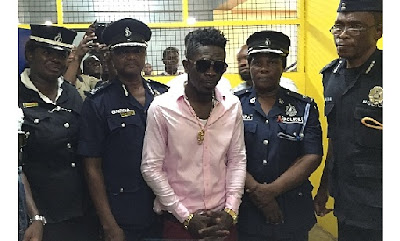 Shatta Wale In Trouble With Police Over Public Shooting Stunt

The ever controversial musician has been trending on social media for calling out Wizkid, a Nigerian singer and songwriter and claiming he doesn’t see him as a superstar.
This caused another Ghana-Naija war on Twitter. The “Ayoo” hitmaker not satisfied, moved on to other Nigerian artistes and released dissed songs for Timaya and Patoranking.

As if that was not enough, a video which went viral on social media a couple of days ago showed the Shatta Movement boss firing gunshots sporadically into the air while his boys looked on and mentioned names of several Nigerian artistes.

Some notable personalities in the industry have spoken against this latest stunt with Bola Ray, a popular radio personality in Ghana indicating that together with another industry great, Kwami Sefa Kayi, they’ve spoken to the dancehall King and asked him to apologise.
Anyway, before we can get the apology, it looks like the Police have taken up the issue. The Public Affairs Director of the Ghana Police, ACP David Eklu says what Shatta Wale did in the video could amount to an offence.

Speaking in an interview with Andy Dosty on Daybreak Hitz on Hitz FM, the police PRO noted that the act itself is an offence but the police would have to conduct further investigations to establish that the tape hasn’t been doctored or manipulated in any way before they take the next line of action.

If you fire a gun without lawful and necessary reasons it is an offence.
I have seen the video, I don’t know the circumstance under which the video was shot. For all we know it could have been tailored to create an impression.

In case you’ve not seen the video being discussed here, check it out below.