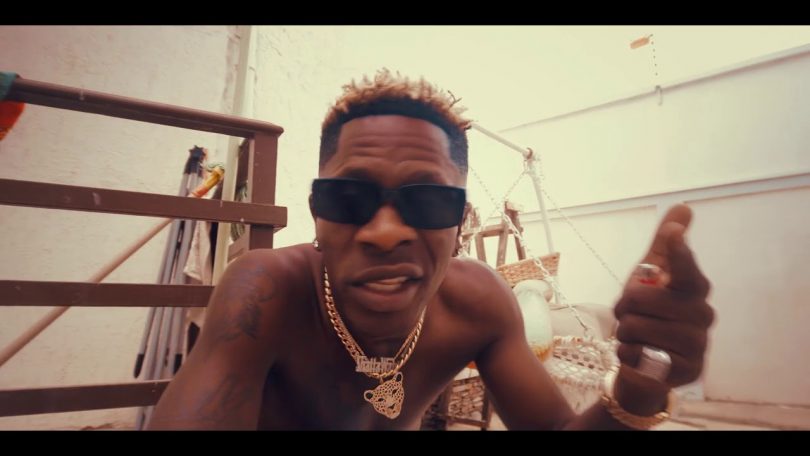 Shatta Wale finally reacts from his Hideout as Ghana Police Searches for Him.

His PA and road manager, Nana Dope, claimed yesterday that Shatta Wale was rushed to an unknown hospital after engaging in a shoot out with some masked gunmen on the East Legon road last night.

Nana Dope went on to lie that the musician was at the emergency ward battling for his life while the gunmen were on the run thanks to the Ghana Police.

The message shared on Nana Dope’s Snapchat caused fear and panic as many sought for more details about the supposed shooting but we knew it was false.

Later on that night, the Ghana Police issued a statement saying they have searched all the known hospitals that can operate on gunshot wounds but the dancehall musician is no where to be found.

They added that Shatta Wale and his road manager Nana Dope is not in their house as well.

Well, the person who was allegedly rushed to the emergency ward of a hospital for being shot has miraculously healed and spoken.

Reacting to his own stunt and the way Ghanaians received it, Shatta Wale said he was forced to pull such cheap stunt to put the Ghana Police on their toes.

Shatta Wale made it clear that he was surprised the Ghana Police was mute when his life was threatened by a prophesy from a so-called man of God so he decided to teach them a lesson.

He added that the fake prophesy got him in a mood of violence since no one in Ghana cared about the psychological or emotional trauma he experienced.

Touching on his wearabout, Shatta said he coiled into a hole because he felt his life was in danger and not because the police was looking for him.

Shatta said he took along the mobile phones of Nana Dope and Deportee to circulate his false news and also make it look real.

Many have called for his arrest for causing fear and panic. Meanwhile his father, just woke up and has now seen the cheap stunt so has added his piece.

Shatta Wale’s father claims his son is indeed missing and all efforts to reach him has landed on rocks.

Read the full statement he posted on Facebook below.

THIS IS WHAT I HAVE TO SAY .

Psychological, or emotional trauma, is damage or injury to the psyche after living through an extremely frightening or distressing event and may result in challenges in functioning or coping normally after the event.

The statement made by this false prophet has gotten me in a mood of violence since no one in this country cares.

So the police of this country want to tell me none of them saw those threatening statement online to take Action ?

This pastor said 18th October shatta wale will be shot and you want to tell me you didn’t see from you cyber crime department nor did u hear or came across anything like that online ?

If my life can be threatened and there is no law to take actions on that then I guess I will do what is right in the eyes of God.

This is not the first time I have had these threats in this country am now I am going these emotional trauma alone ,

My dad has even defended me on radio on this same issue .why ? Why ? Ghana ? Why ?

Yes ,my life is in Danger and am on the run till this country shows me there are LAWS..

Deportee am sorry for taking your phone

Dope sorry for taking your phone

To my fans am sorry but I will have to fight this fight alone and get it done ..

To my Dad I say sorry for putting you thru stress

PASTORS ALWAYS SAY THINGS AND LATER PLAN EVIL TO IT ,SO THAT ME AND YOU WILL BELIEVE THEY ARE POWERFUL MEN OF GOD ..

THE YOUTHS OF THESE COUNTRY ARE TIRED OF RELIGIOUSNESS ,WE KNOW GOD ALREADY AND THAT IS THAT .

IF THIS WILL MAKE ME STOP MUSIC LIKE HOW MANY WANT ME TO STOP ,

THEN SO BE IT

CUZ I AM TIRED OF THE NEGATIVITY IN THIS COUNTRY.

Thanks for reading “Shatta Wale finally reacts from his Hideout as Ghana Police Searches for Him” on Ghbestpromo.com