Usain Bolt Dreaming Of Being In Mourinho’s Squad.. Read More 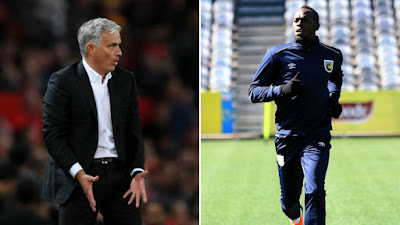 On his 32nd birthday, the eight-time Olympic gold medalist was put through his paces in a tough first training session with the Mariners – who will offer him an A-League contract should he impress enough over the coming months.


While committed to the side and his ambition to become a professional footballer, Bolt admitted his biggest aspiration remains to play for the Red Devils.

“I daydream all the time about just big things…one of my biggest is to play for Manchester United,” Bolt said.

“I think that could be my biggest dream. You can’t get bigger than that.

“Even if it’s just for five games or one game, that would be a dream come true because as I said I’m a massive fan.

“But this is the start and I’m really appreciate of everything the Mariners have done. They’ve given me the opportunity to make my mark and get my start here.”

A huge fan of United, Bolt played at Old Trafford earlier this year for Soccer Aid and has had a number of conversations with current coach Jose Mourinho.

Yet to play professional football however, it appears the Jamaican’s dreams of playing for United will remain just that unless he takes the world by storm at the Mariners.

Bolt did reveal he had options to play in France and Spain but opted to make the move to Australia and join a club willing to train him for up to 12 months without actually signing him.

Article continues below
Though his life has revolved heavily around athletics, Bolt has been a lifelong football fan and even began by playing between the sticks.

“I started as a keeper in primary school and the faster I got the further up the field I got,” he said.

“In high school I was centre-back and eventually a centre forward.”