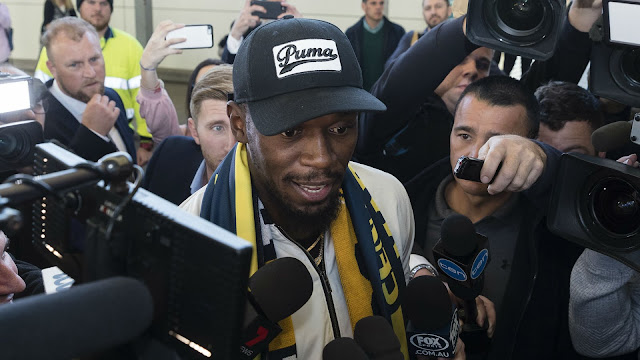 After weeks of headlines, Usain Bolt has officially arrived in Australia to begin an indefinite training period with A-League side Central Coast Mariners.

The Jamaican sprinter is keen to prove his ability on the football pitch with the Mariners willing to give him the time to get up to speed.

While seen by some as a gimmick, for Bolt himself the opportunity is one he’s desperate to take and he joked he’ll be in Australia until he turns his dream into a reality.

“This is real. I’ve told the world that I want to be a footballer and I know what I can do for the Mariners who are giving me the opportunity to show what I’m capable of.

“You all know that I love Australia, so I am really proud to call it home for now.”

Bolt is expected to live and train on the Central Coast with the club’s CEO Shaun Mielekamp revealing earlier in the month just how long he might be given to get up to scratch.

“His training program will be structured to see if he can reach the level of play needed to earn a professional contract,” Mielekamp said.

“Only time will tell, but it’s exciting to see what this will do for our region. The importance for us right now is to look after an athlete coming here to try and become a professional player.”

The eight-time Olympic gold medalist is to expected to have his first of potentially many training sessions on Tuesday.