Ronaldo Explains The Real Reason Why He Signed for Juventus 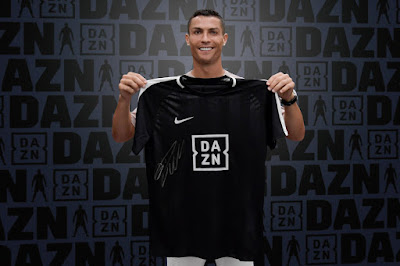 Cristiano Ronaldo has admitted that the reception Juventus fans gave him after his remarkable overhead kick goal against them last year helped sway him to join the Serie A side.

The strike was so impressive that even the home Juventus supporters stood up and applauded the Portugal star’s effort.

Those fans wouldn’t have known it at the time, but their ovation would be a major factor when Ronaldo decided to move from Madrid to Juventus in the off-season.

“The small details make the big difference at the end of the day so … I would say what I saw in the stadium helped [the transfer],” Ronaldo said on his unveiling as DAZN’s first Global Ambassador.


“Wow!” Even Cristiano Ronaldo was amazed by his overhead kick against Juventus!

“Not 100 per cent of course but some parts make you think.

The 33-year-old said his strike, which has been nominated for the UEFA Goal of the Season prize, produced a reaction from away fans that he had never seen before.

“[It] was in my opinion one of the best goals of my career so far,” Ronaldo said.

“And, of course, when the people start to applaud me in the stadium I was like, ‘wow’.


“[It] surprised me a lot because this has never happened in my life, so [it] was [an] unbelievable moment.”

Ronaldo will be busy trying to help Juventus win an eighth straight Scudetto and the Champions League this season, but he revealed that he enjoys other sports during his down time.

The Portugal star in particular is a fan of Ultimate Fighting Championship (UFC), but has a wide array of sporting interests outside of football.

“I like for example UFC fights,” Ronaldo said. “I like to watch tennis, basketball… ping pong is my second sport that I know how to play well.

“But I will say UFC is good, I like to see the fights.