Ghanaian Champions Stunned By Ivorian Side In Dormaa 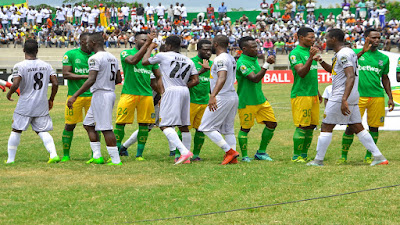 First half goals from Gbagnon Anicet Badie and Willy Braciano Ta Bi ensured a valuable win for the visitors at the Nana Agyeman Badu Park in Dormaa.

The result leaves the Fire Boys with absolutely no chance of making the quarter-finals, despite a final matchday away clash against Moroccan side Raja Casablanca in the waiting on August 29.

Aduana coach Kenichi Yatsuhashi was forced to do without some key men on Sunday, naming an XI that excluded the suspended duo of captain Yahaya Mohammed and full-back Justice Anane as well as the injured duo of Bright Adjei and goalkeeper Joseph Addo.


Winger Zakaria Mumuni and Derick Sasraku were also absent, having left to pursue careers abroad, while Anokye Badu also had to sit out the crucial encounter.

It, therefore, came with little surprise as the Fire Boys struggled to get things going in what was a must-win fixture.

Asec, who also had to play without influential injured striker Amed Toure, broke the deadlock in the 24th minute from the spot through Badie, who expertly converted after Farouk Adam fouled Zana Oumar Coulibaly in the box.

As Aduana tried to find a way back into the game, the visitors silenced Dormaa once again in the 35th minute as Braciano Ta Bi coolly dinked the ball over goalkeeper Gordon Yeboah.

Aduana, still, did not give up as Elvis Opoku’s header only flew wide while Sam Adams’ long range effort yielded nothing.

With Congolese side AS Vita Club beating Raja Casablanca 2-0 in the other group game, Aduana have moved bottom of the table, six points behind leaders Vita, four points adrift of second-placed Raja and two points underneath third-positioned Asec.