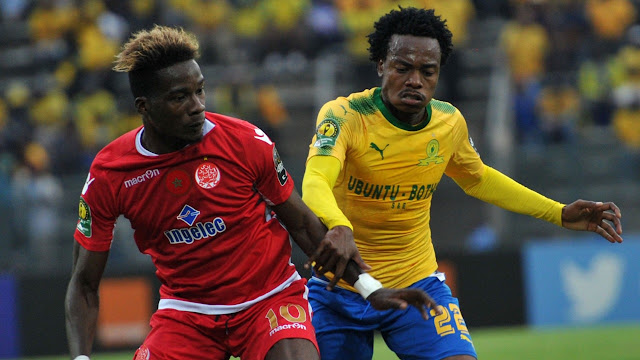 With the Caf Champions League group stage having reached its penultimate round, the action on the field is expected to heat up.

All eyes are likely to fall on Group C in particular, when two of the most recent winners of the continent’s most prestigious crown lock horns.

Mamelodi Sundowns and Wydad Casablanca is slowly becoming a rivalry to savour and with both teams occupying the top two spots, the Moroccan capital will be the place to be on Friday night.

This will be the fourth meeting between the two juggernauts of African football, with Sundowns having won one and Wydad also boasting a solitary win, which came on penalties in last year’s competition.

However, the most recent meeting which was held earlier in the year, ended in 1-1 draw and a tight encounter will be expected once again.

Sundowns though, will admit that this has by no means been their best campaign thus far, but after beating Togo-Port -registering their first win of the competition, they will be pleasantly confident.

Meanwhile, not much has to be said about the reception that is likely to meet Sundowns on the field in Morocco. Sundowns have been here before, and they will know that a hostile atmosphere cannot be met with fear.

For players such as Gaston Sirino among others, this will be their first escapade to North Africa, and if there was ever a game that the little magician will need to work his magic it will be this one.

With the likes of Percy Tau and Khama Billiat having parted ways with the club in the offseason, Sirino has taken over the mantle. He is currently Sundowns’ joint top scorer with two goals in this year’s competition alongside Sibusiso Vilakazi and much will be expected of him.

Sundowns coach Pitso Mosimane may also be tempted to continue to field Jeremy Brockie upfront, despite having Jose Ali Meza at his disposal.

Brockie may not be finding the net on a consistent basis but his physicality as well as experience having experienced the culture of hostility in North Africa before with his previous side SuperSport United during their Caf Confederation Cup run to the final, could come in handy.

But it will surely not be all Sundowns’ way. Wydad have several dangerman, none more so than Ismail El Haddad. The 28-year-old has been immense upfront for the Moroccans and will look to add to his five-goal tally in this year’s edition of the continental showpiece event.

Wydad certainly have no shortage of firepower upfront. With the likes of Michael Babatunde and Mohamed Ounajem among others they have amassed an impressive 14 goal tally in the tournament.

If this is is any indication of what could happen then not only will Sundowns’ defence have their work cut out, but fans could be in for an absolute treat.

Also, on Friday night, moving to the West of the continent, Horoya are set to host Togo-Port in a must-win clash for either side.

Defeat for either side, could potentially spell the end of their respective campaigns.

Horoya have impressed many in this year’s competition. The Guinean champions have scored 12 goals in the competition and boast a spectacular home record.

Horoya last tasted defeat in Conakry in April of 2017, an unbeaten streak that exceeds 50 games.

This is surely a daunting stat for Togo-Port, who have experienced a campaign filled with many ups and downs.

In their debut campaign, Togo-Port have just won one game and currently sit bottom of the Group C rankings.

Nonetheless, with players such as Ayi Hunlede and club top scorer Issifou Bourahana, Togo-Port will look to upset the applecart.

It should be noted though, that the last time these two sides locked horns the game ended 2-1 in favour of Horoya.

Nevertheless, could history repeat itself this time around, or will Togo-Port do the unthinkable in Guinea? Only time will tell.