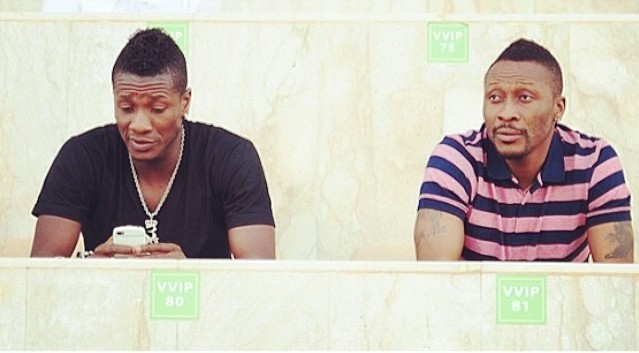 MyNewsGh can confirm that Black Stars skipper Asamoah Gyan did NOT ask for a DNA test of his three children with his wife but it was rather a request his elder brother, Baffuor Gyan who survives on his younger active brother put out and leaked to the media.


It is, however, true that Asamoah Gyan has filed for a divorce in order to be able to remarry. He intends to marry ‘popular’ socialite Nina Atalah, former wife of Buju Banton and ex-girlfriend of Stephen Appiah, John Dumelo and allegedly, Ibrahim Mahama.

A highly placed source inside the Gyan family has confidentially informed MyNewsGH about how the family is heavily against the decision of Asamoah Gyan, but the only person he listened to, aside his brother Baffour Gyan, is his mum who is late.

Documents MyNewsGh  has obtained from the court process also revealed that Baffour Gyan scanned his younger brother’s signature into it requesting an order for a DNA testing of the kids.

The family source hinted us that Asamoah Gyan confirms he and his brother had jokingly discussed DNA testing for their kids after their boxer Emmanuel ‘Gameboy’ Tagoe’s DNA test for his kids came negative against him but it was not something he was willing to pursue because Gifty began life with him from way back 2002.

Asamoah Gyan allegedly heard about the DNA development in the media after his brother had caused it to be published. He did not react.

Our attempts to reach Gifty Gyan for her side of the story has proven futile. She has not responded to numerous messages and calls to her phone.

Our source who is a relative of the Gyans said the wife of Asamoah Gyan has been good to him and some members of the family, revealing that in addition to Madam Cecilia asking Gyan not take penalties for Ghana, she also asked him to treat Gifty with respect and make sure he marries her. While his mother died in November in 2012, they held her funeral in March 2013 and Asamoah quickly fulfilled his mother’s wish by marrying Gifty few weeks after the funeral in 2013.

While it is sensitive information, it has also been revealed that Asamoah Gyan asked Gifty to abort the first child in 2005 but his mother stood against the decision and took care of Gifty till she gave birth around which time Gyan’s football career was beginning to blossom.

The family is also unhappy about the action of Baffour Gyan who sees Asamoah Gyan’s wife, Gifty and her children as a “threat” to him and since the death of their mother, Cecilia Amoako, Baffour has allegedly made life hell for Gifty Gyan and her children, including personally leading Machomen to pack her things out of his brother’s huge Basilica residence in Kasoa early this year, and moving them to a semi-furnished 2 bedroom house on the Spintex road asking Gifty and her children to go there anytime they are in Ghana.

MyNewsGh has obtained video evidence in support of this.

MyNewsGH has also confirmed that Baffour Gyan has himself moved into the other marital home of Gifty Gyan located at 15 Eleandor street, East Legon together with his own wife and children. He has also taken possession of all the cars available to Asamoah’s wife for himself and forcing her to resort to picking UBER and Taxi since she arrived in Ghana over the divorce. The family member who was in court said Gifty even came to court briefly in a taxi.

MyNewsGH’s checks show that the Kuami Eugene ‘Wish me well’ video of Gifty Gyan posted on the internet alleged to have been shot when her divorce was filed is rather an old video she made when Kuami Eugene released the hit song in June this year.