The Truth And Myths Behind Bale’s Explosive Start… Read More

Gareth Bale is the man of the moment to watch at Real Madrid.

Without Cristiano Ronaldo at the club, the Welshman is his official heir as the central figure of the Madrid team. He is on the field naturally due to his qualities and global status. And it is also by choice of the club, who firmly believe now that Bale is not in the shadow of Ronaldo, he will be able to take off to heights not seen since he arrived in the Spanish capital.

However, none of that is being noticed for the first time. What really makes Gareth Bale the man of the moment at Madrid is that he is living up to that billing with regularity.

In the pre-season Bale scored three goals against the likes of Roma, Juventus and Milan. In the European Super Cup he provided a great assist to Karim Benzema, while against Getafe in the league opener he scored another goal.

He is omnipresent at the moment. Which raises a large question: How is Bale doing it, and why had he not done so before?

On one hand, it is clear that knowing he is the star of the team has given him a lift. At the end of the Champions League victory over Liverpool in Kiev, Bale claimed he needed more minutes and new challenges. Now that he is the axis on which the Blancos attack turns, Bale is offering a version of himself more in line with his role for Wales – Bale and 10 others.

The train is moving at full speed now that the entire cargo depends on his engine. He likes that role, and it’s noticeable.

However, although the absence of Ronaldo has definitely boosted Bale’s mentally, it is not clear all that much has changed on the field, despite the theories about it. 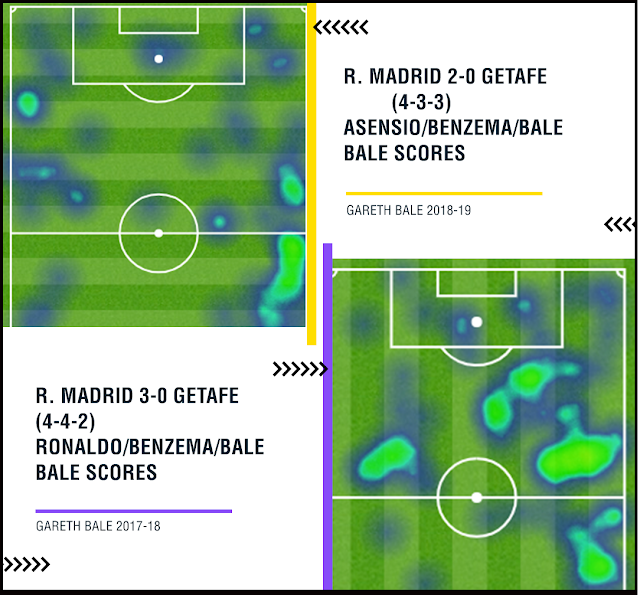 For starters, Bale was already in a clear ascendancy since the end of last season, even with Ronaldo in the team. Bale has scored eight goals in his last eight official matches with Real Madrid, on just 11 shots. Six of those eight games included in the streak were last season, including the Champions League final where he scored two goals in the victory against Liverpool.

Heat maps do not show that Bale feels more liberated on the field without Ronaldo – at least in regards to his positioning. The comparison of the heat maps of last season and the first matches of the present campaign show that the Welshman occupies an almost identical area as he did last season. Julen Lopetegui played Bale as a right winger in a 4-3-3 just as Zinedine Zidane, did, though under Zidane the Wales star was a right winger in a 4-4-2.

His positioning last year against Getafe and in the opener this year illustrate that point. Same opponent, same position on the far right side, with Bale scoring goals in both matches. However, it seems that he was even more static in Sunday’s game than last spring – even when it appeared Real Madrid were more convincing, even exciting, in the contest against Getafe this season.

Although it is early to get a significant sample after only two games this year, the data also shows Bale generated more of an end product in the Merengue attack last season than in this one. Even playing next to Cristiano Ronaldo last year, the Opta stats reveal Bale had more shots (3.33 per 90 minutes vs. 1.84), generated more clear chances on goal (1.03 per 90 to .92) and scored more (.80 per 90 vs .43). 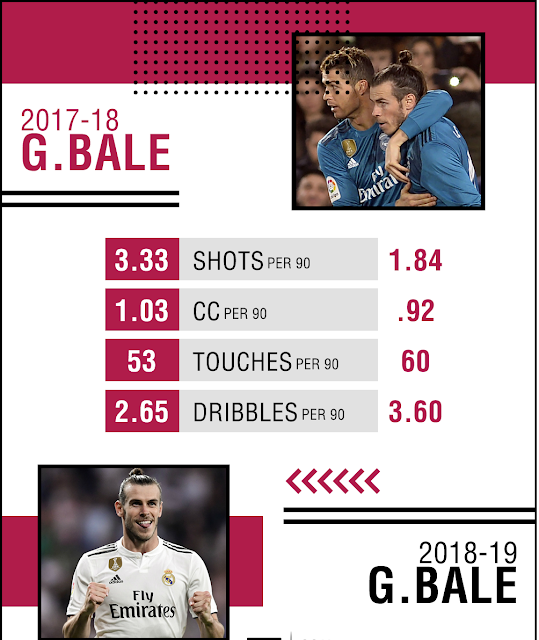 However, there are some statistics that do show a change in Bale’s usage. Though he may be taking up the same positions, with Lopetegui and without Ronaldo, the Welshman touches the ball more (60 touches per 90 to 53 last season). That is to say, he participates more in the buildup and his team-mates look for him more.

He also has been dribbling more frequently than last season (3.60 per 90 to 2.65). That is evidence of his greater confidence and a greater role for Real Madrid in the current season with no Ronaldo present.

According to these stats, the rejuvenation of Bale is much more of a mental story than a tactical one.