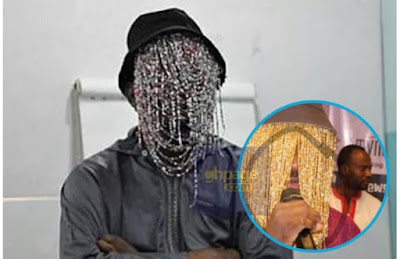 A prophet in Ghana has prophesied that ace investigative journalist, Anas Aremeyaw Anas will die on the 30th of November 2018 for flaunting the rules of dark spirits that empowered him with his spiritual powers.

According to the man of God who spoke with the media on anonymity, there existed a bond between Anas and his late mother who died this year and the bond was what kept him going for all these years.

From his explanation, Anas and his mother gained that spiritual bond from their shrine in Mali but Anas kept flaunting the rules from the shrine and even joined Illuminati. He explained that Anas mother was supposed to live into his 90s but the spirits killed the woman at 62 so that they can get to Anas and punish him by killing him.


He explained that Anas who later realized his mistakes tried t to appease the dark spirits in Mali by sacrificing 12 cows but he was told it was too late.

For this reason, Anas was not able to behold his own mother’s corpse because his mom’s spirit was so angry it would have struck him if he neared her corpse.

The pastor claims he was at Anas’ mother’s funeral and made contact with the family of the journalist who also knew perfectly well and has since contacted him to follow some spiritual directions to stop the impending doom.

According to him, the family has agreed to provide the following items to deal with the problem: three cola nuts, and in which Anas’ feet had been imprinted, two white calico cloth materials, 32 snails, four mice, three black cats, four white cats, the good old red under-pant of women of old, a lock of Anas’ hair and sample of his urine and cash amount of GH¢60,000.

But the spiritual exercise has not started because Anas’ sister, Deladem told him Anas is not cooperating with them. He has refused to provide the urine and the lock of hair with the excuse that nothing will happen to him today or tomorrow.

“He (Anas) does not seem ruffled enough to provide the needed urine and lock of hair, as suggested by the revered pastor”. He only says nothing could bring our mother back and he was not dying today nor tomorrow so we should stop worrying ourselves.”

According to the pastor, because there have been many celebrity death predictions in the media lately which sparked outrage among Ghanaians, he is not willing to reveal his identity for now but if Anas still refuses to comply, he will come public.