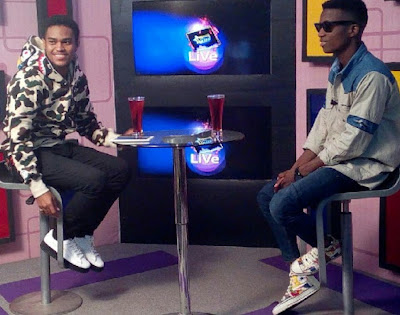 Kofi Kinaata has put to rest debates about him being a better rapper than popular musician Sarkodie.

The reigning VGMA songwriter of the year, known in real life as Martin King Arthur, said the debate is a nonstarter since he has always looked up to Sarkodie in his rap career.
The argument became rife when Sarkodie did not feature Kinaata in is ‘Trumpet’ single; a song which featured rappers Sarkodie deemed as the future of rap music in Ghana.
The Head of Kofi Kinaata’s record label High Grade Family, Samini once posited that Kinaata will soon take over the reins of rap in Ghana.
“For now Kofi Kinaata is the next big thing in Ghana. He will be better than Sarkodie. I can bet on that because he is from my camp,” Samini said during an interview on Radio Universe.
But speaking on Starr Drive with GiovaNita, the ‘Confessions’ hit maker said the comparison is not only misplaced, but needless.
“I do Fante rap,” he said. Giovanni asked; “What about the Akan language. Are you better than Sark?”
He replied: “I respect Sarkodie. Sark is way, way up there. I looked up to Sark. I follow his steps. A comparison shouldn’t exist.”
He, however, believes he has the best lyrics currently on the Ghanaian music landscape. He is current out with his latest single dubbed ‘Last Show’ which is receiving some airplay. The song which he says is a message to himself insinuates that no person will reign forever in whatever field. Kinaata has promised to release three more tracks before the end of this year.
Source – starrfmonline