Fuse ODG sacks Killbeatz From His House… Here’s What Happened 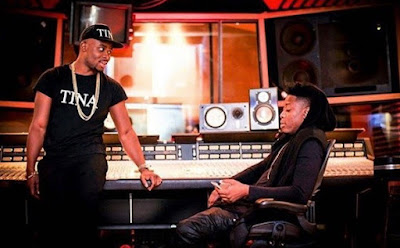 According To Killbeatz’s Manager, Here’s The Real Reason Why Fuse ODG Threw The Music Producer Out Of His House.

Management of multiple award winning producer Killbeatz, has exclusively stated to Kulelive.com why Fuse ODG is throwing Killbeatz out of their mansion, and falsely accusing him of being a ritualist.

According to Killbeatz’s manager, Fuse ODG is behaving this way because of the hatred he has for rising star King Promise. Really? Read their side of the story and see if it can be true?

The long and short of this whole accusation is because Fuse ODG hates the fact that King Promise wasn’t signed under ODG records, rather, Legacy Life Records which is owned and managed by Killbeatz. Manager stated.

Fuse ODG has stated on many occasions to put King Promise on his label but for some reasons, we have refused to do that and he (Fuse ODG) hasn’t been happy with our declines.

But it doesn’t make sense to us because Killbeatz has produced a whole album for you Fuse ODG which we are all planning to release in January. So why will you fly down to Ghana to act strange to your producer over some false claims? Manager of Killbeatz asked

He further went ahead to talk about the blood found at Fuse ODGs house, which to them is a result of Killbeatz birthday celebration few days ago with some close friends and nothing more.

We had a birthday party for Killbeatz and as part of the celebration, R2Bees and some other friends brought a full cow for the barbecue. Muslims, after killing a cow, there are certain prayers one has to recite for taking away its life and we respect that tradition so we did that. We slaughtered the cow and poured out the blood in a hole which is normal to everyone so why will Fuse ODG book a flight all the way from London to Ghana and accuse his producer for doing rituals at a house they both own. Fuse ODG preaches This Is New Africa but it seems he knows nothing about Africa and Ghana if he tells me he doesn’t know this act is common in our Motherland.

Asked if Killbeatz is still in the house or not, the manager answered,


Killbeatz has angrily packed from the house because he was in Tema when his girlfriend called him to inform him that Fuse ODG is in the house sacking her. Killbeatz rushed to meet Fuse ODG to explain things to him but he refused to listen all because of the hatred he has for King Promise and the fact that we don’t want him to use his image to push the boy.

In the first place, Killbeatz doesn’t even owe Fuse ODG any explanation because that house is for both of them. They both worked hard to buy it together so if he is saying it’s his house then I can say Fuse ODG get problem, which we will handle later because as it stands now, they both own that house.

For Fuse ODG to disrespect Killbeatz in the presence of his girlfriend, he has moved out until tempers cool down.

Before ending, Killbeatz’s manager addressed the issue of they bringing unknown persons to Mr Hackett’s room in his absence.

This whole thing is funny, he did mention that in his absence, we allow people to sleep in his managers room. This is a total false. The only person who spent some hours in Mr Hackett room is Paedae popularly known as Omar Sterling. He was recording some days ago and out of stress he decided to rest a bit so he took a short nap inside Mr Hackett’s room and that’s all. But what’s wrong if Paedae rests in your managers room? This rapper f***n owns a house.

We are yet to reach out to Fuse ODGs camp to find out their comment on this particular report.