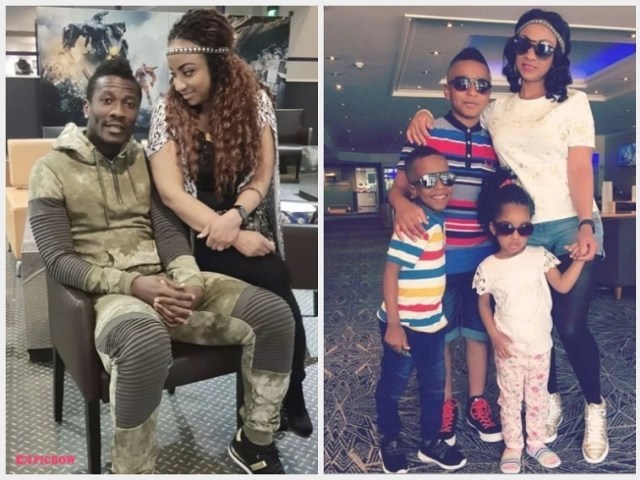 Gifty Gyan, wife of super-rich Black Stars striker Asamoah Gyan has resorted to the use of UBER and other local taxi services to commute to and fro, MyNewsGH.com has confirmed.

This is because the brother of her husband, Baffour Gyan has himself moved into and taken over her marital home along with every single property in her possession. One such property located at 15 Eleandor street, East Legon is now being occupied by Baffour Gyan and his own family.

He has also taken possession of all the cars available to Asamoah’s wife for himself including a Toyota Camry sports she bought by herself, a source confirmed to MyNewsGh.com; forcing her to resort to picking UBER and Taxi since she arrived in Ghana over the divorce.

Ghanaians have since descended heavily on Asamoah Gyan over the incident of his divorce when it became public, especially when it was revealed he intended divorcing his wife to marry a ‘serial predator of rich men’, one Nina Atalah who has dated John Dumelo, Stephen Appiah, Ibrahim Mahama and is ex-wife of Buju Banton.

But the Blacks Stars Skipper, Asamoah Gyan has reacted to the backlash of his plans to divorce his wife with whom he has three children with and also to conduct DNA to ascertain the rightful paternity of the children, an idea from his brother.

Asamoah Gyan earlier this week left Ghanaians spellbound when news making the rounds suggested he was not only seeking for divorce to the woman he has been married for years but trying to disown the children all this while he has flaunted as his.

But in a subtle response to all the tongue-lashing and counter allegations, Asamoah Gyan on his Instagram post stated “This guy has said it over and over again that nothing breaks him down. Keep planning to lock him at the front door. He will definitely pass through the back door.”