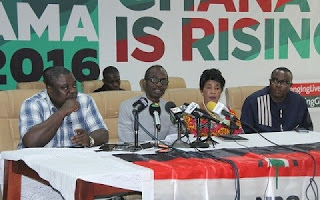 Pollster Ben Ephson has said he “will not be surprised” if former National Organiser of the NDC Samuel Ofosu Ampofo emerges national chairman at the party’s congress to elect new national executives today.

Also, the experienced election pundit says deputy general secretary Koku Anyidoho may topple his boss in the polls if he plays his cards well.

“If what it was as of the last two days is anything, I won’t be surprised if Ofosu Ampofo wins,” he told Starr News Regina Borley Bortey in an interview Saturday.

On Koku’s chances Ephson said: ” If Koku is able to use Asiedu Nketia’s own words against him, I won’t be surprised if he wins the day”.

Over 9000 delegates are expected to take part in the polls.

Meanwhile, Former President John Mahama has advised the NDC delegates to vote for executives they can trust.

According to him, Ghanaians are counting on the NDC to deliver them from the hardships inflicted on them by the Akufo-Addo government hence the NDC cannot fail.

In a solidarity message ahead of the election, Mahama said Ghanaians are willing to change government in the 2020 elections.

“Across the seven regions I have so far visited, Ashanti being the latest, the message from our grassroots is one- “to unite and work to deliver Ghanaians from the unprecedented hardship imposed by the lying Akuffo-Addo administration,” Mahama wrote.