It’s Okay Even If We Fulfill 60% Of Our Promises – Dr. Anthony Akoto Osei 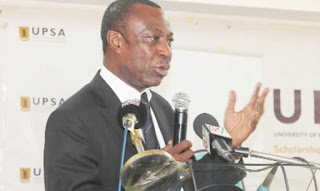 The Minister of Monitoring and Evaluation, Dr. Anthony Akoto Osei, has said he will consider it a job very well done by the Akufo-Addo administration if it is able to fulfill 60 percent of its promises.

“If you ask me if we have fulfilled all our promises, I would say no, but we have a four-year mandate. We may not fulfill all of them, but we want to do enough for Ghanaians to see that we mean business… So I’m not deterred at all. If we are able to do at least 60 percent of our promises, we’d have done very well,” he said on Point Blank on Eyewitness News.

He, however, expressed frustration with the pace at which government’s flagship projects are being implemented.

Dr. Akoto Osei attributed this to the slow rate of disbursement of funds.

“I’m not happy with the rate of implementation of projects, and I’ve told my colleagues. One of the first things I discovered was that we have borrowed about GHc6 billion from various sources but only GHc3 billion has been disbursed. So we’ve encouraged the Ministers to increase the disbursement rate. That is a lot of money to be sitting in our books and paying commitment fees. So we are working on all of that.”

The Minister was speaking after the presentation of the 2019 budget in Parliament on Thursday by Finance Minister, Ken Ofori-Atta.

The Minister provided an update on the status of government’s projects including its flagship one district, one factory programme, which is expected to see factories established in each district in the country.

According to Mr. Ofori-Atta, 79 factories will be at various stages of construction across nine regions by the end of the year.

The government made a number of significant promises ahead of assuming power like the Free Senior High School and the setting up of the Special Prosecutor Office, which have been largely fulfilled.

But other pre-election promises like the One Village, One Dam project in northern Ghana are yet to properly take off as the Akufo-Addo administration enters its second year.