Zanetor Joins The Campaign For Mahama 2020 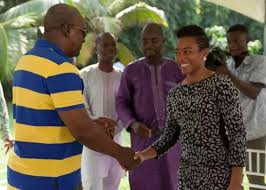 Member of Parliament (MP) for Klottey-Korle constituency, Dr Zanetor Agyeman-Rawlings joined the campaign team of former President John Dramani Mahama during its tour of the Greater Accra Region on Wednesday.


The MP, who is the eldest daughter of the founder of the National Democratic Congress (NDC), Jerry John Rawlings, was seen canvassing for support for former President John Mahama.

Dr. Agyeman-Rawlings was on stage with other dignitaries of the party, including former regional chairman, Sam Nii Ade Coker on Wednesday.

Mynewsgh.com reports that the MP also went through some of the areas in her constituency in the company of the campaign team.

When she had the chance to speak, Dr Agyeman-Rawlings said the former president stands tall among the other contenders.

She went on to tell delegates to vote for him as the party’s flagbearer.

The daughter of J.J. Rawlings is among 94 of the 106 minority MPs have who have promised to use their resources to campaign for the former president.

YEN.com.gh had previously reported that that Mahama, who suffered a stunning defeat at the hand of Nana Akufo-Addo in the 2016 election, officially launched the process of giving the presidency another shot.