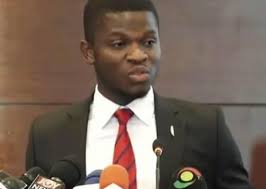 A popular young National Democratic Congress member, Sammy Gyamfi, has been elected the National Communications Director of the party after a two-day marathon voting exercise ongoing at the Ghana International Trade Fair.

The lawyer, who was TEIN president at the KNUST received a resounding victory Sunday, beating his only contender, the current Deputy Communications Director of the party, Fred Agbenyo by 4,000 votes.

Provisional results from by the Electoral Commission which supervised the elections that have entered counting ballots stage, showed Sammy Gyamfi garnered 6,225 of the over 9,00 votes cast.

Sammy Gyamfi has within a short time shot into the limelight and endeared the hearts of many NDC delegates due to his exhibition of maturity in political communication.

With youthful dynamism and innovation, the young chap is said to have well represented the party at various levels especially in the media, something that gave him an urge over Fred Agbenyo.

Many members of the NDC, especially the youth, believe Sammy who was recently called to the Ghana Bar, has the wherewithal to match the NPPs newly appointed Communications Director Yaw Buabeng Asamoah.

As the party’s official spokesperson, he will have a herculean task of convincing Ghanaians to give the NDC another chance to lead the country.

He has held direct and indirect positions within the party including but not limited to Member of the Ashanti Regional Communications Team, Spokesperson for the Chief Executive of Kumasi Metropolitan Assembly, Mr. Kojo Bonsu.

He was the President for TEIN at KNUST between 2011 and 2012. Prior to that he was the Public Relations Officer for TEIN KNUST in 2010.