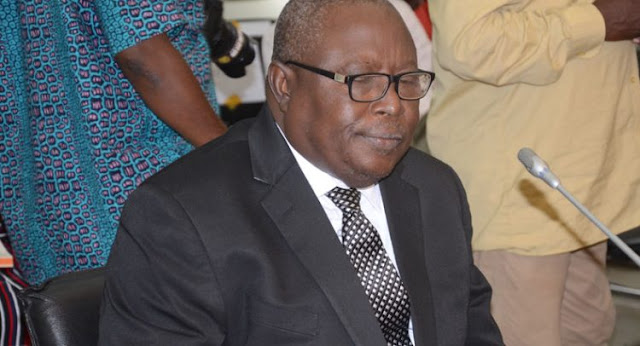 He has urged him to stop complaining and focus on his job on fighting corruption.

His advise comes at the back of Martin Amidu who recently complained about the lack of logistics for his office as well as a legislation to enable them to work seamlessly.

Martin Amidu has hinted that his office is in a near hopeless situation to deliver its mandate in fighting corruption.

In an article, the former Attorney General said his office has so far had “woefully inadequate” infrastructure and has been under-resourced since its establishment a year ago.

Amidu compared his situation to that of that of Acting Attorney General of the US Mathew Whitaker, insisting a lack of resources has left the Special Prosecutor’s Office in an almost hopeless situation to fight corruption.

The Whitaker’s scenario which I have just read reinforces my own conviction that the effective way to stifle the fight against corruption is to apply Whitaker’s scenario. It also reminds me of the almost utter hopelessness in which the newly established Office of the Special Prosecutor finds itself almost one year after the President caused its establishment as his flagship and vision to fight corruption in Ghana with an overwhelming national consensus and support,” Amidu lamented.

“One year down the line it has only a small three bed room house as an Office woefully inadequate for lack of shear physical space to accommodate any reasonable number of employees, lack of subsidiary legislation, and consequently also financially crippled without any ability to acquire the requisite expensive operational anti-corruption and other equipment for the Office let alone to function efficiently,” he added.

According to him, the office has so far lacked the resources to adequately deliver on its mandate.

But the staunch supporter of the NPP, Kwame A-Plus has urged the Special Prosecutor to stop complaining.

He stressed that Martin Amidu can fight corruption even under the tree.

He said Martin Amidu made “all the noise about Woyome” when the NPP was in opposition adding that he should go and prosecute the corrupt officials and shouldn’t demand a “4 bedroom house with 13 air conditions.” In a Facebook post, he wrote “If you really want to fight corruption you can do it from under a tree masa. Were you not the same person who made all the noise about Woyome? Didn’t you ask the court to allow you to cross examine Woyome when NPP was in opposition? At that time were you the special prosecutor working in an “Oval Office?” Before you become the SP you wrote countless articles about corruption under the NDC. Now HE the president has appointed you SP. Go and prosecute them you say you want a “4 bedroom house with 13 air conditions.” You want to turn ice man abi? Ah!! Even if your office is the problem at least start with woyome till your office is ready anaa? After all the noise, one year on, even Woyome’s money you have not been able to take it. Everyday blaming government.

What happened to that big house at Cantonments you were taken to. I know everything that happens in this country. Were you not taken to a house adjacent the new Bank of Ghana hospital? Didn’t one of the deputy chiefs of staff stop his job and take you there himself? So how did you end up in a three bedroom house? What happened? Government has done it’s part. After all the noise you made, if you are not able to prosecute anyone we will prosecute you ankasa for deceiving us.”

My Office Is In No State To Fight Corruption – Martin Amidu