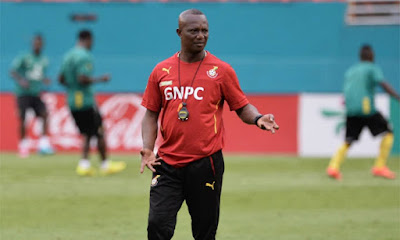 Ghana coach Kwesi Appiah has denied reports of naming an official 23-man squad to face Kenya in the 2019 Africa Cup of Nations qualifiers on September 7.

A list appeared in the local media last week, without captain Asamoah Gyan, the Ayew brothers, Wakaso Mubarak and Jeffrey Schlupp, but with Kwadwo Asamoah making a return to the outfit.

“The thing is that I don’t know who brought the list out last week [because] we’ve not released our list for the game,” Appiah told Ghanaweb TV.


“Hopefully, by Tuesday evening or Wednesday the list will be out but the one which was circulating in the local media is not authentic and as to who brought out that list, I don’t know because it’s fake,” he added.

Appiah also denied reports of naming a new captain for the Black Stars to succeed Asamoah Gyan who has been struggling with injuries.

“We don’t have a new captain. Asamoah Gyan remains the captain of the Black Stars,” he said.

“We want to have our peace. Ghanaians should support the team and stop bringing up issues that do not exist.”

Ghana are toppers of Group F with three points, two above Kenya.