Referee Bergonzi Explains The Denied Penalty for Asamoah Against Sassuolo 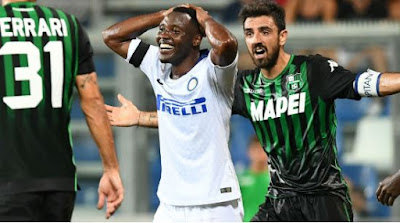 Retired Italian referee Mauro Bergonzi has rejected suggestions that Inter Milan were cheated in the 1-0 defeat to Sassuolo at Mapei Stadium – Citta del Tricolore on Sunday.

Sassuolo’s Domenico Berardi scored the opener by the 27th minute from the spot after a teammate was brought down in Inter’s box.


However, the visitors had a similar incident ignored as Kwadwo Asamoah collided with Sassuolo midfielder Francesco Magnanelli in the opposite box.

Inter’s request to consult the VAR was also turned down.

“This is because it was not a clear mistake. The protocol is clear on that so the referee decided not to grant the penalty,”

“It will definitely hurt Inter and the player because they went on to lose the game. If that decision was given to them, probably it could’ve changed the story but I think the referee had it right,” he added

Inter will next face Torino in the Serie A on Sunday.