1 min read
Reports reaching Ghnewslab.com has it that Ghanaian footballer has been confirmed dead in Zambia.

Reports reaching Ghnewslab.com has it that Ghanaian footballer has been confirmed dead in Zambia.

According to report by Zambianfootballnews.com sighted by Ghnewslab.com, the deceased, Justice Selasi Oko was in the country for trails with Zambian Division 1 side Kabwe Yourh Soccer Academy.

But during one of his training with the team he collapsed and later died.

During his first meeting with journalists in Kabwe, Katanga said “We recorded the death of unnatural cause on 31st December 2018, where one Justice Salasi Oko, a footballer of Ghanaian nationality came to Kabwe Youth Soccer Academy for trials but as he was running with the team he collapsed. 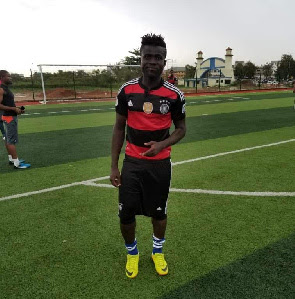 He was rushed to Mahatma Gandhi and later referred to Kabwe Central Hospital where he died.” He disclosed that Oko was brought by Frank Simunji, a football agent and that his father in Ghana has been notified, adding that formalities are being made at their embassy on how the funeral will proceed.