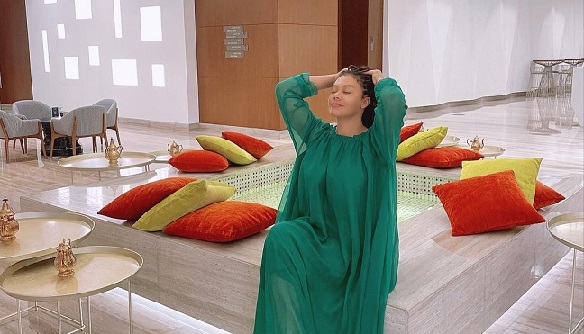 Nadia has captured her admirable mansion in sets of photos released to social media this morning.

The mother of 4 is seen sitting pretty in her white mansion with her legs crossed and catching cruise.

The interior decor of her house looks absolutely stunning, spacious and neat.

Captioning the photo, Nadia Buari wrote, ‘The grass isn’t greener on the other side, it’s green where u water it. 💚,

This obviously goes to say that she’s really worked hard and invested in putting this big mansion together.

We are not sure of where exactly the house is, but we can beat our chest to say that it’s definitely situated in an affluent neighborhood.

Also, we cannot tell whether Nadia owns more than a house but it’s like she does. What shows she wouldn’t want more if she has been able to build herself this big house. Thanks for visiting Ghbestpromo.com to READ “Nadia Buari puts her Mansion on display after reports that Jackie Appiah owns 9 houses”