We did not Ignore “Death Prophecies” – Ebony’s Manager 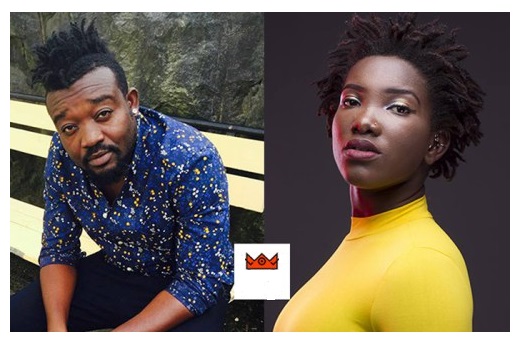 We did not Ignore Death Prophecies – Ebony’s Manager

Manager of the late sensational singer, Ebony Reigns has finally broken his silence after the tragic death of the musician Thursday evening.

The CEO of Ruff Town Records/Midas Touch Inc., Bullet who is known in real life as Ricky Nana Agyemang, refuted claims that the artiste and her management team ignored several prophecies about her death.

According to him the artiste and her team diligently followed directions given them by renowned sound engineer, Kaywa who was one of several people to predict the tragedy. Kaywa also prayed for them all in an effort to cancel the ‘prophecies of doom’ about the “Maame Hw3” hitmaker.

Some video and audio recordings have gone viral on various social media platforms revealing how many pastors predicted the death of the singer in 2017 with some asking her to change her ways and others urging her to get serious men of God to pray for her.

Many people have condemned Ebony and her management for ignoring the prophecies but her manager, Bullet is asking Ghanaians stop judging the late singer as they did not ignore the prophecies.

“I have seen videos and heard audios of some people and prophets after the death of my girl ebony.can people have a little heart and stop judging her.kaywa saw this long time and did a lot of directions and prayers for us.i have chats with prophets who also saw this coming.we did what we could but God knows best!”

Bullet shared some personal WhatsApp chats he had with Ebony as well as some chats from the management team’s platform to show that indeed they did not rest on their oars so far as the ‘death prophecies’ were concerned.


The chat on the management team’s platform from 3rd October reveals that Ebony refused to travel to Kumasi for a show her team had already received payment for because of one such prophesies which indicated that something might happen to her on her way to Kumasi.

The ‘Hustle’ hitmaker insisted she was not going to Kumasi whether by air or road till after December. 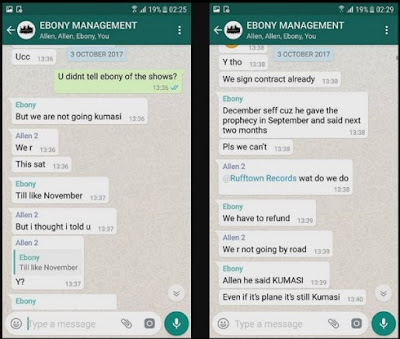 Ebony and Bullet in another conversation were making plans for a donation to an orphanage, a direction given them by Kaywa to help prevent the prophecies of death from coming to pass. 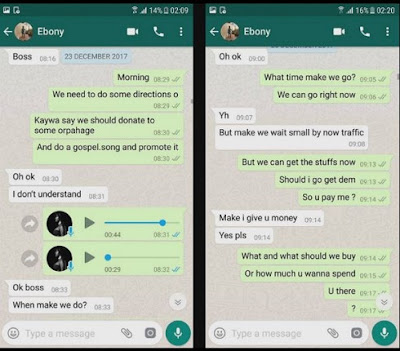 Unfortunately, the 20-year-old singer who was to celebrate her 21st birthday in a few days still died in an accident on the Kumasi road despite all they did, and all Bullet can say to this is that “God knows best”.
Ebony Reigns died in a fatal car accident on the Sunyani-Kumasi road Thursday evening whilst returning to Accra after visiting her mum in the Brong Ahafo regional capital.
Two other people, a military officer and a friend of the singer also died in the accident whilst the driver of the jeep in which they were travelling is undergoing treatment at the Bechem Government Hospital.
Source: www.ghanaweb.com