Osafo Marfo Justifies Appointment Of His Sons To Top Positions 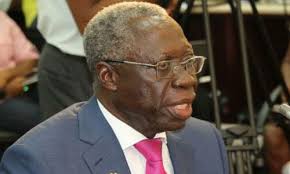 Senior Minister of the Republic of Ghana, Nana Yaw Osafo-Maafo has justified the appointment of his sons to top government positions.

According to Mr Osafo-Maafo who was speaking on Asempa FM’s Ekosii Thursday, his sons’ occupations of those positions were on the merit of their competencies and qualifications.

The Senior Minister claimed his children were poached into those positions and not because they bore the name, Osafo-Marfo, adding that the Osafo-Maafo name should suffer because of him.

Mr Osafo-Maafo has come under severe criticisms for what many have described as the strategic positioning of his children into top government jobs.

Two of his children work at the Social Security and National Insurance Trust and the National Communications Authority.

Some reports have even accused him of specifically creating a position for his last son because ahead of his appointment, the portfolio he now occupies did not exist.

But when asked if there was no other qualified Ghanaian who could have occupied the positions, Mr Osafo-Maafo said: “Sometimes you need an external inflow to bring some work ethics and know-how to come and do it and not because he is my son”.