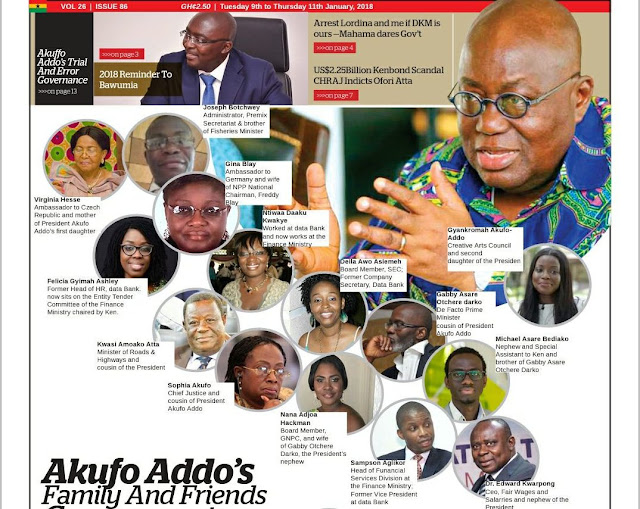 All the presidents Ghana has had under the Fourth Republican constitution have been accused of practising nepotism for appointing known family to positions of appointment.

President Nana Addo Danquah Akufo-Addo has been cited for leading the charge when it comes to nepotism in government.

Speaking on Corruption Watch on Adom FM Friday, Executive Director of the Centre for Democratic Development (CDD), Professor H Kwesi Prempeh, however, noted that successive presidents cannot be blamed for the phenomenon because nepotism is cultural.

“It is a difficult matter for our society because we can’t separate the public from the private,” he stated.

The only way out, Prof. Prempeh suggested, is for the state to embark on massive education for the public to understand that when a relative is in power, it is wrong for him to use his influence to get you a job.

Also, a governance expert and a Fund Raiser for Ghana Integrity Initiative (GII), Michael Boadi said nepotism was not only an African problem.

Read Also;  It’s Okay Even If We Fulfill 60% Of Our Promises – Dr. Anthony Akoto Osei

He noted that the phenomenon started in the Roman Empire where Cardinals preferred their family members serve them than other people.

Mr Boadi said though nepotism was not as bad as corruption, the political leaders owe it to citizens to create a level playing field for everyone to have a share of the national cake.

Transparency International defines Nepotism as a form of favouritism based on acquaintances and familiar relationships where someone in an official position exploits his or her power and authority to provide a job or favour to a family member or friend, even though he or she may not be qualified or deserving.

The leadership of the Progressive Peoples Party (PPP) in March 2017 at a press conference accused President Akufo-Addo of running a “family and friends” government in the wake of his appointments of new ministers and other appointees.

Nii Allotey Brew-Hammond expressed disappointment in the inability of the NPP government to form an all-inclusive government as promised prior to the 2016 election.

President Mahama in recent times has been attacking the Nana Addo led administration of taking the issue of nepotism to a very embarrassing level.

He criticised Civil Society Organizations, religious and traditional leaders for keeping quiet over happenings in the Akufo-Addo government and further bemoaned what he described as the inconsistency in their political commentary.

Other Presidents have also been accused of engaging in politics while in office.

Below are the lists of people appointed and whether or not they account for nepotism.

The two are brothers to the then President Mills.

In August 2016, a former Rector of the Ghana Institute of Management Public Administration, GIMPA, Prof. Stephen Adei accused President Mahama of practicing nepotism. He linked nepotism to the president’s appointment of people from the Northern Region. According to him, per his research findings, one out of every four of the President’s appointments came from his area of origin.

This practice, he believes, will not augur well for national cohesion, especially when Ghana is a unitary state. The NPP throughout President Mahama’s leadership accused him of practising nepotism.

Meanwhile, President Kufuor had Mr D.K. Osei, nephew, as his official Private Secretary. The most alarming appointment, which set tongues wagging at the party’s secretariat was that of Ms Janet Opoku Acheampong, the President’s niece, who was jumped over three top officials and given the position of Acting Commissioner, Internal Revenue Service (IRS).

Rawlings in the year 2003 accused President Kufuor led New Patriotic Party administration of practising nepotism to the extent that the party is referred to as a family government.

In the year 2004, Collins Dauda accused President Kufuor and his government of pursuing injustice and nepotism