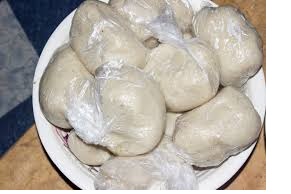 A woman who tried to smuggle dried leaves suspected to be Indian Hemp to some inmates at the Accra Central Police Station has been arrested.

Naa Lamley Odartey is reported to have concealed the suspected items in three balls of banku under the guise of feeding an inmate.

According to reports by Chief Inspector, K. Adu, the woman got arrested by two police officials on duty who, upon inspecting the meal Naa Lamley Odartey brought, realized it was stuffed with substances suspected to be narcotics.

The arrest of Naa Lamley Odartey follows one Patience Abbey denying that she was behind the food.

According to Patience, the arrested lady – Naa Lamley Odartey – was the one who provided her with the meal to be given to the prison inmate.

Meanwhile, police officials have sent the meal to the forensic department to determine its real ingredients and also find out whether the substances found in the banku are any form of narcotic.