Sacked Judges Vow To Fight Removal By The President 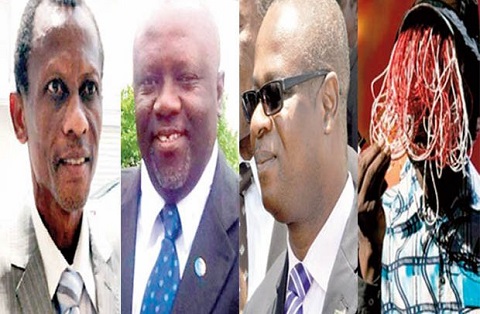 The three justices of the high court removed recently by President Addo Dankwa Akufo-Addo have vowed to challenge the decision they describe as disappointing.

This was after the Committee established by the Chief Justice, Justice Sophia Akuffo, pursuant to Article 146 (4) of the Constitution, to investigate a complaint lodged against the three judges by Mr Anas Aremeyaw Anas, recommended their removal from office.

“The President, in accordance with the provisions of Article 146(9) of the Constitution, has acted on the recommendations of the Committee, as the Constitution enjoins him to do, and has, accordingly, removed the three Justices of the High Court from office on the grounds of bribery and corruption,” said a release signed by Director of Communications, Eugene Arhin.

However, counsel for the three embattled judges, Nii Kpakpo Somoa Addo, posted on Facebook that:

“Justices Logoh, Dery and Ayisi Addo have received the news of their removal from office by President with great disappointment. This is because their case at the ECOWAS Court has been scheduled for hearing on the 23rd of January 2019.”

The Lawyer said the three remain focused on their case at the ECOWAS Court in which Ghana is fully represented by the office of the Attorney-General.

“They intend to vindicate their rights at the ECOWAS Court and will not rest until their case has been heard to a logical conclusion and Justice delivered. It is important to note that during this period that their case has been pending before the court they have not been given any opportunity to appear he-Fore any committee.”

“Their removal, therefore, opens a new chapter in the ongoing case which they intend to pursue both be-Fore the ECOWAS and African Human Rights Court if need be,” he stated. 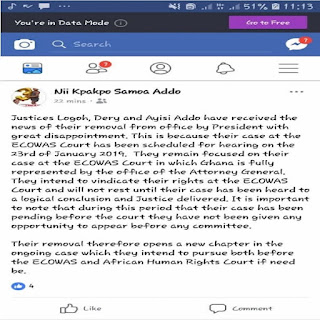