Strika rewarded for his role in ‘Beast of No Nations’ 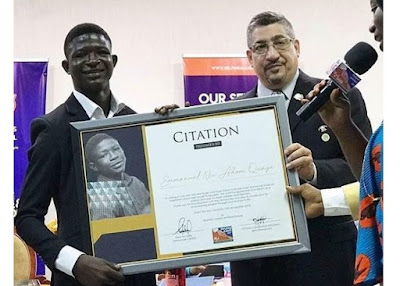 Born Emmanuel Nii Adom Quaye, Strika has now received his first award for his role in the popular movie “Beast of No Nation”.

In the photo posted on Instagram, Strika was seen receiving a special award in the name of his outstanding role acted in the famous movie.


The inscription on the award reads, “Citation Presented To Emmanuel Nii Adom Quaye,” including an explanation to the awards.

It has been 3 solid years since the released of the movie “Beast of No Nation” and it may be base on a chance for the young actor to receive such an honour at this moment.

However, Strika during one of his interviews after he was spotted on the streets begging for alms revealed that his friend Abraham Attah has now developed a cold attitude towards him ever since he made it outside the country.

READ ALSO: Ten (10) Most expensive Pets in the World

Some social media commentators bashed Abraham Attah for neglecting Strika after gaining spotlight in a movie they both featured in.

The manager for both actors in the midst of the cause revealed that they were the best of friends and that Strika was just telling lies to the person who spotted him.

It has also been established that Abraham Attah always visits his “Beast of No Nation” co-stars Strika and another actor under their management, Justice, whenever he is in Ghana.