Sarkodie Tells Why He Was No Having “S3x” With Tracy 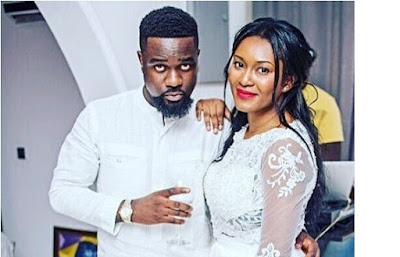 Sarkodie has confessed to Tim Westwood in U.K that one of the hardest moments he had with his baby mama, Tracy was the first month she gave birth to their first child, Titi.

Obidi on the show revealed that he was asked not to have any sexual encounter with her for about a month and that period was like a hell for him. According to him, he could touch her but his actions “were not supposed to lead to the main thing.”

He described that period as “the hardest”. Michael Owusu as he is known in real life continued to outline the strategies he put in place just to take his attention off his baby mama so that he can stay away from her as he was asked to.

So my daughter came and the first two weeks or one month, I’m not supposed to touch her (Tracy). You are not supposed to do anything and that was like the hardest time. You can (hold her) but you don’t have to let it lead to the main thing (sex) so you need to take a break which is like very very hard.
What I was doing was trying to take my mind off it and trying to do things that can make me focus on something else.”

The ‘Adonai’ hitmaker added that “but this girl (Tracy) keeps coming into the room to pick stuff wearing some stuff that is so hard to stay back. You know the funny thing, you can stay away for three weeks without doing it when you know you are free to do it but when you are told not to do it, that’s when you want to do it”.