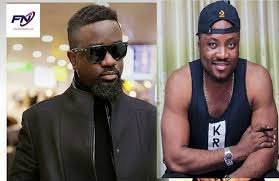 Shatta Wale’s ‘Reign Album’ launch and concert which took place at the fantasy Dome at the Trade Fair Center in Accra on Saturday October 13,2018 shall forever remain as one of the most successful album concerts ever to be staged in Africa.

The four-hour event saw the self-acclaimed dancehall king perform some of his old and newest tracks to the tumultuous fans who had thronged the venue to support him.


But one of the most controversial moments that nearly marred the enchantments of the event was when stand-up ace comedian DKB insulted celebrated rapper Sarkodie’s mother on stage.

Sarkodie in a recent song titled ‘My advice’ took a dig at Shatta Wale asking him to stop bragging about his wealth and also desist from wearing inferior chains which he termed as ‘Alumi’.

Some had argued that the release of the song was carefully planned to create a buzz around the ‘Reign’ concert while others assert Sarkodie was indeed fed up with Shatta Wale’s deafening comments.

After refusing to comment on Sarkodie’s ‘My Advice’ song , the ‘Taking Over’ hitmaker finally did so when he mounted the stage to perform at the album launch and concert.

Shatta Wale who was taking a swipe at Sarkodie, asked DKB if an artiste who wears ‘alumi’ chain can organize such a successful event.