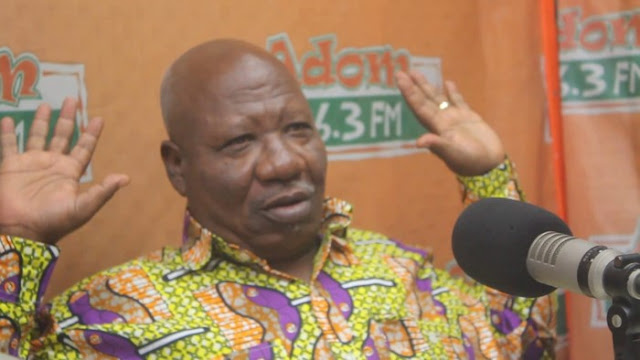 It’s already terrible as it is, having the party penniless, months after its kick out from government, they cannot afford to worsen it any further by picking leaders who are financially unstable and incapable of putting the party back on its feet as far as finance is concerned, Central Regional Chairman of the National Democratic Congress, Bernard Allotey Jacobs has said.

His comments come in the wake of recent controversies surrounding the charge of some GHC 420K as filing fees from all aspirants who wish to lead the party into the 2020 polls.

Apart from Mr Mahama, all the other aspirants had expressed reservations about the GHS420,000 filing and nomination fees and threatened to boycott the race.

Touching on the issue on Adom TV’s ‘Badwam’ Show Tuesday, Mr. Jacobs bemoaned the ‘broke’ state of the party, emphasizing the need for a well-positioned person to take over affairs of the party so it can recover from its current state.

Read Also: NDC Do Not Understand What Socio–Economic Development Is – Akufo Addo

“If you are going to be a flagbearer and you are telling us you can’t mobilise funds from outside, so filing fees should be reduced so you can have a chance to go and contest, then we are not serious, then you want to tell us that the party is not serious but if you look at the situation of the party, accusations that the party was corrupt when in government, now I’m telling you, the party has no pesewa to organize itself towards the 2020 elections”, he stated.

He further added; “We are now galvanizing ourselves, and those who want to be leaders of the party, because once you are elected the flagbearer, you automatically become the leader of the party so should we go for a poor person to come and lead the party? When you see how much efforts we’ve put into reactivating the party, the branch, the party has become so vibrant now? No! we are so desirous to win the 2020 elections.”

He expressed surprise at the fact that persons who served in various capacities under the erstwhile John Mahama government will claim to have somewhat ‘difficulty’ generating funds to support their political ambitions.


“All those contesting, they have been President Mahama’s appointees. They were sent to some juicy positions, do they want to tell us that they can’t mobilise money to ensure that the flagbearer elections will run smoothly, that every person who has the right to vote will go and vote?….we beg the flagbearers, we are not insulting them, and they shouldn’t also insult us”, he maintained.

On comments made by Founder of the party, suggesting that the fees were outrageous and ought to be reduced, he said;

“I disagree with Rawlings on his statement that the fees should be reduced, if we gather the amount of monies we will need for the flagbearer race, even if they all paid, the money will not be enough”.

Allotey Jacobs meanwhile was confident that the massive backing Former President John Dramani Mahama received from various supporters to raise funds for his nomination forms completely indicates that the people have made a decision and that the former President, no doubt, has superiority over his competitors.

“Take a look at what is happening in the party now with regards to John Mahama. From the start, we went to tell him, he is the people’s choice and see what happened yesterday (Monday). People lining up to give even as low as 1 cedi to ensure he picks up his nomination and files. It tells you the popularity of the man.

What is happening now, can be translated into victory in 2020. It tells you the popularity of the man and that a decision has been taken. My advice to all the other contestants is that they should all rally behind President Mahama. It will be good to rally behind President Mahama so that if they have anything, they can all contribute into the party coffers for us to have enough money to start our campaign”, he noted.