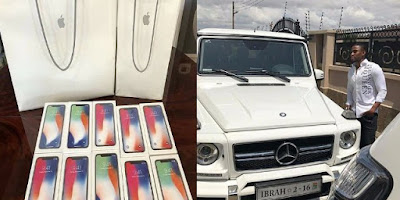 Ibrah is one young rich guy most Ghanaians know for his luxurious lifestyle.
Anytime you see the young millionaire in town, he would be in one of his lavish cars displaying his wealth.

On the thirty-second birthday of Ibrah which happened on Tuesday, November 21, 2017, he is captured on tape dashing out iPhone to passengers in a commercial bus.

This tells how the young man is rich.

Ibrah is friends to most rich and famous personalities in and outside the country.

He mostly hosts Naija superstar Davido anytime he is in Ghana.

Watch Ibrah giving away iPhone 7 to the passengers in the trotro below: